Bridgeton is a city in Cumberland County, New Jersey, United States, in the southern part of the state, on the Cohansey River, near Delaware Bay. As of the 2010 United States Census, the city's population was 25,349, reflecting an increase of 2,578 (+11.3%) from the 22,771 counted in the 2000 Census, which had in turn increased by 3,829 (+20.2%) from the 18,942 counted in the 1990 Census. It is the county seat of Cumberland County. Bridgeton, Millville, and Vineland are the three principal cities of the Vineland-Millville-Bridgeton Primary Metropolitan Statistical Area, which encompasses those cities and all of Cumberland County for statistical purposes and which constitutes a part of the Delaware Valley.

Similar to other areas near rivers and the bay, this area was inhabited for thousands of years by indigenous peoples. At the time of European contact, Lenni-Lenape Native Americans lived in the area, following a seasonal pattern of cultivation and hunting and fishing. The state-recognized Nanticoke Lenni-Lenape Indians of New Jersey maintain a cultural center here, serving a community of 12,000 in Cumberland, Gloucester and Salem counties.

The first recorded European settlement in what is now Bridgeton was made by 1686 when Richard Hancock established a sawmill here. Settlers established a pioneer iron-works in 1814. Bridgeton was incorporated as a township by an act of the New Jersey Legislature on March 3, 1845, from portions of Deerfield Township. Bridgeton city was incorporated on March 1, 1865, replacing both Bridgeton Township and Cohansey Township. The city was named for its location at a bridge on the Cohansey River and is said to be a corruption of "bridge town".

After the American Civil War, Bridgeton's industrial base and commercial centrality in this area of high agricultural production, along with its high profile as an educational center (it was home to the South Jersey Institute, the West Jersey Academy, and two notable academies for women), made it the most prosperous town in the state. Bridgeton was home to glass factories, sewing factories, metal and machine works and other manufacturers. The most notable of these was the Ferracute Machine Works, founded and operated by Oberlin Smith, an inventive genius and philanthropist credited with inventing the first device for magnetic recording, and now in the New Jersey Inventors Hall of Fame.

Bridgeton Historic District covers a quarter of the city and includes more than 2,000 properties. These range from the early Federal architecture to the 1920s, including many structures eligible for individual listing and some documented by the Historic American Buildings Survey (HABS) during the 1930s. The district was added to the National Register of Historic Places in 1982 and is the largest such district of any municipality in New Jersey. 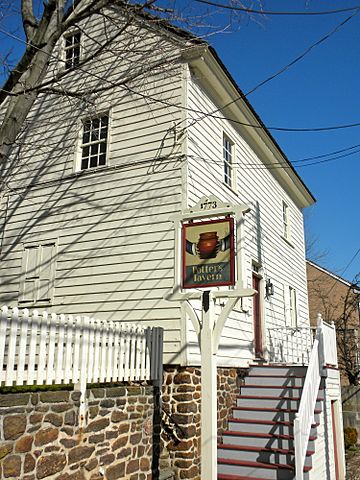 Although it is visually dominated by large Victorian homes and a downtown area constructed from the 1880s to the 1920s, the district, besides many neighborhoods of gingerbreaded "doubles" that were essentially working-class housing, includes several notable structures dating from the 18th century and early Federal period. One of these is Potter's Tavern, said to have been built in the 1750s, but restored to its appearance in 1776 when it was home to The Plain Dealer, considered New Jersey's first newspaper. A second is Brearley (Masonic) Lodge, founded by General James Giles in 1795, and still active. A third is the so-called "Nail House" (c. 1815; second build c. 1855), administrative home of the Cumberland Nail & Iron Works that established Bridgeton's industrial prowess in the early nineteenth century. The first Cumberland National Bank building (1816), which was only the second bank chartered in New Jersey, is now part of the Bridgeton Library. There is also the David Sheppard House (1791), recently restored with assistance from the Garden State Historic Trust and home to the Cousteau Coastal Center of Rutgers University since 2008.

Bridgeton straddles the tidal Cohansey River and is located near the center of the Delaware Bay lowlands. It derives its name from the original movable bridge that offered the option of regular overland travel on the "King's Highway" across the Cohansey watershed region for the first time in 1716. It is said that its name went from Bridge-towne to Bridgeton in 1816-1817 owing to a printing error on documents published by the Cumberland Bank.

Bridgeton is home to numerous large municipal parks. The largest of these, consisting of pinelands, wetlands and lakes, as well as the original raceway system that provided waterpower to the mills, was formed out of the property owned and managed by the Cumberland Nail & Iron Works until 1899. Long considered a recreational area for the region even under ownership by the Iron Works, the property was finally purchased in 1902-3 by the City and preserved in perpetuity as the Bridgeton City Park. It includes three major lakes: Mary Elmer Lake, Sunset Lake, and East Lake. Bridgeton Park encompasses about 1,500 acres (6.1 km2). It now includes the Cohanzick Zoo, New Jersey's oldest zoo, which is free to the public.

The city suffered an economic downturn in the 1980s with the loss of its remaining manufacturing sector jobs in glass and textiles. Agricultural employment, however, has continued to attract immigrant workers largely from Mexico but also Guatemala, creating new challenges and opportunities for revitalization. A significant minority of Bridgeton residents and their children speak Zapoteco, either as their only language or alongside Spanish. Downtown Bridgeton includes an art gallery, a Native American post, second hand stores, and perhaps most notably, a makerspace. The makerspace, called STEAMWorks was opened as a collaborative project between the city and the local Cumberland County College, run by the college the space offers specialized equipment and software to the public at a membership based pricing system, as well as workshops and a limited set of certification courses, no involvement with the college is required. Bridgeton Main Street declared its downtown a Culinary Arts district and is highlighting downtown activity through the food and cooking-related retail sector. Bridgeton Main Street Association is the oldest Main Street Association in the state, founded in 1990.

In 2008, Rutgers opened the Cousteau Coastal Center of its Institute of Marine & Coastal Sciences in the former David Sheppard House, a base from which it coordinates cutting-edge ecological research and develops modules for environmental learning at all educational levels from elementary school upward. South Woods State Prison, opened near Bridgeton in 1997, is the largest state prison in New Jersey and provides a range of employment. Bridgeton is also home to the Rutgers Food Innovation Center, an entry point for startup food manufacturers that allows a new company or entrepreneur to work with a specialized team from Rutgers University to develop, test, brand, and package their product. 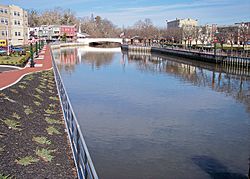 The Cohansey River in Bridgeton in 2006

Unincorporated communities, localities and place names located partially or completely within the city include East Lake.

The climate in this area is characterized by hot, humid summers and generally mild to cool winters. According to the Köppen Climate Classification system, Bridgeton has a humid subtropical climate, abbreviated "Cfa" on climate maps.

Residents in the town include numerous immigrants from the south of Mexico, whose Amerindian languages include Zapotec, Nahuatl, and Mixtec.

NJ Transit offers service on the 410 route between Bridgeton and Philadelphia, and the 553 route between Upper Deerfield Township and Atlantic City.

The following public-use airports are located in Bridgeton: 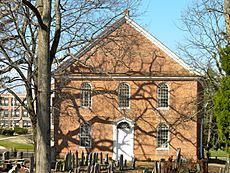 Portions of Bridgeton are part of an Urban Enterprise Zone. The city was selected in 1983 as one of the initial group of 10 municipalities chosen to participate in the program. In addition to other benefits to encourage employment within the Zone, shoppers can take advantage of a reduced 3.3125% sales tax rate (half of the 6.625% rate charged statewide) at eligible merchants. Established in January 1986, the city's Urban Enterprise Zone status expires in December 2023.

The UEZ program in Bridgeton and four other original UEZ cities had been allowed to lapse as of January 1, 2017, after Governor Chris Christie, who called the program an "abject failure", vetoed a compromise bill that would have extended the status for two years. In May 2018, Governor Phil Murphy signed a law that reinstated the program in these five cities and extended the expiration date in other zones.

Bridgeton is home to Ardagh Group, one of the largest glass production facilities in the state. In 2016, Ardagh Group, Glass – North America became ISO 14001 certified, which recognizes efforts to minimize their impact on the environment, comply with applicable laws and regulations, and work toward continuous environmental improvement.

Bridgeton's public schools are operated by Bridgeton Public Schools, which serve students in preschool through twelfth grade. The district is one of 31 former Abbott districts statewide, which are now referred to as "SDA Districts" based on the requirement for the state to cover all costs for school building and renovation projects in these districts under the supervision of the New Jersey Schools Development Authority.

Students are also eligible to attend Cumberland County Technology Education Center in Millville, serving students from the entire county in its full-time technical training programs, which are offered without charge to students who are county residents. Previously the school (formerly Cumberland County Technical Education Center) was a part-time school in Deerfield Township, and it had a Bridgeton postal address. It moved to its current location and became full time in 2016.

People who were born in, residents of, or otherwise closely associated with Bridgeton include:

All content from Kiddle encyclopedia articles (including the article images and facts) can be freely used under Attribution-ShareAlike license, unless stated otherwise. Cite this article:
Bridgeton, New Jersey Facts for Kids. Kiddle Encyclopedia.