Duffy's Cut is the name given to a stretch of railroad tracks about 30 miles west of Philadelphia, United States, originally built for the Philadelphia and Columbia Railroad in the summer and fall of 1832. The line later became part of the Pennsylvania Railroad's Main Line. Railroad contractor Philip Duffy hired 57 Irish immigrants to lay this line through the area's densely wooded hills and ravines. The workers came to Philadelphia from the Ulster counties of Donegal, Tyrone and Londonderry to work in Pennsylvania's nascent railroad industry. Less than two months after their arrival, all 57 are believed to have died during the second cholera pandemic. While most died of the disease, forensic evidence suggests that some may have been murdered, perhaps due to fear of contagion, as the pandemic spanned several continents and many years.

The site is located in East Whiteland Township, Pennsylvania 1,500 feet (460 m) northeast of the intersection of King Road and Sugartown Road, where a Pennsylvania state historical marker has been placed. 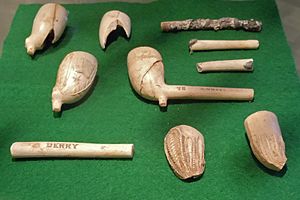 Pipes recovered at the site

Immigrants generally and Irish Catholics specifically were often viewed by the owners and managers of railroad and coal mining companies as expendable components, and by Anglo-Germanic Americans as unwholesome and even dangerous.

Philip Duffy's blacksmith buried the first three workers to perish in individual graves, but when it became clear that all would die he buried the rest of the dead in a shallow ditch along the railroad’s right of way without ceremony or funeral. No death certificates were ever filed for these individuals. Asiatic Cholera usually causes 40-60% casualties within a single population. In this case, all of the workers are believed to have died, leading to the theory that some may have been killed.

Official record of the deaths at Duffy’s Cut remained locked in the vaults of the Pennsylvania Railroad (PRR) until Joseph Tripican, a secretary to a former PRR president, removed them after the company’s bankruptcy in 1970. In the 1990s, one of Tripican’s grandsons, Reverend Dr. Frank Watson discovered the papers in a file and began to research the history with his brother Dr. William Watson, Professor of History, and adjunct professors Earl Schandelmeier and John Ahtes of Immaculata University.

On June 18, 2004, a Pennsylvania state historical marker was dedicated near the site. The text of the marker reads, "Nearby is the mass grave of fifty-seven Irish immigrant workers who died in August, 1832, of cholera. They had recently arrived in the United States and were employed by a construction contractor, named Duffy, for the Philadelphia and Columbia Railroad. Prejudice against Irish Catholics contributed to the denial of care to the workers. Their illness and death typified the hazards faced by many 19th century immigrant industrial workers."

On March 9, 2012, the remains of five men and one woman from those who died at Duffy's Cut Shanty Town were laid to rest in a church burial at West Laurel Hill Cemetery in Bala Cynwyd, Pennsylvania. The men and woman were unearthed by researchers from Immaculata University at the location of the Shanty Town near an Amtrak railroad line in Pennsylvania. A sixth body was recovered and identified as John Ruddy from Inishowen, County Donegal; his remains were returned to Ireland for reburial there. in 2013 The remains of Catherine Burns of County Tyrone who died in Duffy's Cut in 1832 were reburied in Ireland in 2015 Excavation of the deep burial site was halted when Amtrak, which owns the land, would not issue permits for additional digging because of the site's proximity to the railroad tracks.

All content from Kiddle encyclopedia articles (including the article images and facts) can be freely used under Attribution-ShareAlike license, unless stated otherwise. Cite this article:
Duffy's Cut Facts for Kids. Kiddle Encyclopedia.