The center was designed by architect Victor Gruen and built and managed by The Rouse Company. Rouse sold its shopping center portfolio to Pennsylvania Real Estate Investment Trust in 2003 as PREIT converted its holdings from residential to retail. The mall has a gross leasable area of 1,248,347 square feet (115,975.2 m2), placing it in the top ten among the largest shopping malls in New Jersey. Cherry Hill Mall is widely held to be the source of the 1962 renaming of what had been called Delaware Township to its current name of Cherry Hill Township. The town was named Cherry Hill in a voter referendum due to the development of a new U.S. Postal Service office for the region, and historical ties to Cherry Hill Farm, which once occupied land opposite the current mall site, and various locations named for the farm, including the Cherry Hill Estates housing development and the Cherry Hill Inn. The mall is currently anchored by JCPenney, Macy's, and Nordstrom. 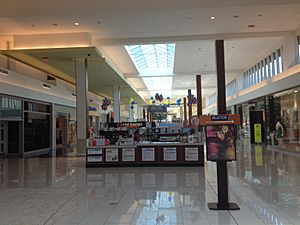 Cherry Hill Mall opened on October 11, 1961 on the former site of the 16 acre George Jaus farm. It was designed by Victor Gruen and built and managed by The Rouse Company at a cost of $30 million. Upon opening, it became largest mall in the nation and is commonly referred to as the first enclosed and climate-controlled mall in the Eastern United States. The mall featured 90 stores, exotic birds, tropical plants, fountains and a movie theater, something unlike anything in what was called Delaware Township had ever seen.

The mall layout was unique for the time. Unlike the dumbbell malls of the time, the mall started from the east anchor, Bamberger's, with a large "Delaware Mall" concourse to the west of it. About halfway along this concourse was an exit way that led back to a twin movie theatre and a children's amusement park with 6 rides and a mini roller coaster with a giant arcade. The center of the mall featured Cherry Court, a court with high ceilings, more tropical plants, fountains, parrots, plus a staircase leading directly to the second floor into Strawbridge & Clothier. The northern wing featured the "Market Court", Food Fair, and Thrift Drug. There were also a Kresge's, Woolworth's, and two liquor stores.

The mall changed through the years; 1973 brought a detached nine-story office tower. In 1977 a new two-story wing was built in the north part of the mall, following the closure and demolition of Pantry Pride and the Market Court. This wing was anchored by JCPenney. The 1990s brought more change to the mall, with the mall being remodeled once more, featuring a teal/gray color scheme and skylights. The mall received different fountains and the ornate Strawbridge's staircase was replaced with a simple escalator/stairs combination. By 1997, two distinct parts of the mall had formed: an upscale wing near Macy's featuring Banana Republic and Victoria's Secret, while the JCPenney wing featured General Nutrition Centers and several urban shops. In 2003, the mall was sold to Pennsylvania Real Estate Investment Trust (PREIT).

The One Cherry Hill office building adjacent to the mall

Under PREIT's ownership, Old Navy moved in early on, but the company had bigger plans for the mall. From the period of 2007 to 2009, the mall underwent a massive $220 million renovation that saw 228,000 sq ft. of new retail added. Jim Ryan and his team at JPRA Architects were brought in to create the mall’s new design. Following Strawbridge's closure after the Macy's takeover, the store was razed and backfilled to make way for the new Grand Court featuring 140,000 sq ft. of new retail, along with a new 138,000 sq ft. Nordstrom anchor store which opened on March 27, 2009. Additionally, the mall added several exterior-facing restaurants in a new section known as Bistro Row. A large-scale entrance to an H&M store to the frontage of Route 38 was also added, while the food court was also moved to the JCPenney wing, in a much smaller configuration than the mall's original food court but now features many eateries. The mall also added The Container Store and Crate & Barrel as outparcel retailers outside the mall's parking lot. Additionally, a three-story parking garage was constructed, while the whole mall was gutted for a clean contemporary marble-and-wood color scheme. The new changes created a new tenant mix similar to King of Prussia. The mall today consists of many upscale stores in a newly renovated interior and exterior. Cherry Hill Mall has completely changed its entire exterior and interior, bringing many high-end stores, new restaurants, and a revitalizing theme running throughout the center.

All content from Kiddle encyclopedia articles (including the article images and facts) can be freely used under Attribution-ShareAlike license, unless stated otherwise. Cite this article:
Cherry Hill Mall Facts for Kids. Kiddle Encyclopedia.