New Hope is a borough in Bucks County, Pennsylvania, USA. The population was 2,528 at the 2010 census. The borough lies on the west bank of the Delaware River at its confluence with Aquetong Creek. The two-lane New Hope – Lambertville Bridge carries automobile and foot traffic across the Delaware to Lambertville, New Jersey on the east bank. New Hope's primary industry is tourism. 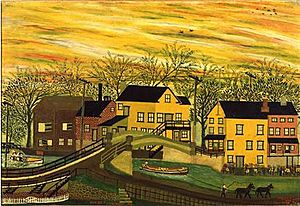 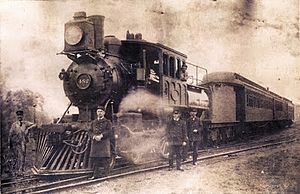 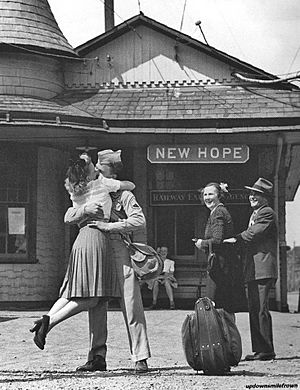 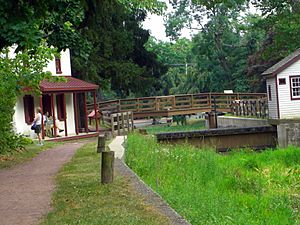 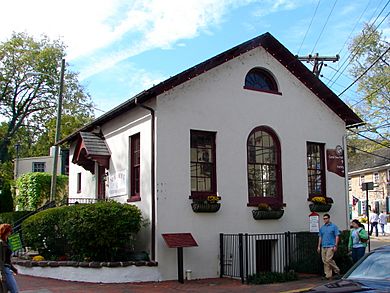 The Old Town Hall serves as the Visitor's Center

New Hope is located along the route of the Old York Road, the former main highway between Philadelphia and New York City. It was generally regarded as the halfway point, where travelers would stay overnight and be ferried across the river the next morning. Though this route is largely obsolete, the section of U.S. Route 202 that passes just north of town still bears the name York Road. The original route is now known as Bridge St. (PA 179).

During these early days, the town was known as Coryell's Ferry, after the owner of the ferry business. The current name came into use following a large fire in 1790 that burned down several mills in the area—their reconstruction was considered a "new hope" for the area.

The night prior to his famous crossing of the Delaware several miles to the south, George Washington is said to have lodged in New Hope. He destroyed the ferry so the British could not follow him, and after the battles of Trenton and Princeton, when British troops were sweeping the area for the American forces, there was no response when they rang for the ferry. The British assumed the town was sympathetic to the Colonial forces and shelled the town. Several of the older structures in the town still boast of having unexploded British ordnance lodged in their roofbeams.

Historic former residents include James A. Michener and Aaron Burr.

The North Pennsylvania Railroad finished construction of their New Hope Branch in 1891, later being taken over by the Reading Railroad. Passenger service to Philadelphia's Reading Terminal as well as all other passenger activity was terminated in 1952 from Hatboro, also the end for electrified track, and New Hope. Between 1952 and 1966, only freight trains were seen entering and leaving New Hope, mostly to deliver paper pulp for the Union Camp Paper Corp. and to deliver sand and gravel to James D. Morrissey Materials Co., a cement company and a division of James D. Morrissey, Inc. In 1966, the New Hope & Ivyland was formed and bought 16 miles of trackage spanning from New Hope southwest to Ivyland. Scenic tourist excursions started the same year. Freight service to New Hope was then handled by the New Hope & Ivyland. In 1972, SEPTA, who by then took over Reading Railroad's passenger operations, extended the electrified route to Warminster and reinstated passenger service to the town. Freight service to James D. Morrissey Materials Co. ceased sometime in the late 1970s and to Union Camp Paper Corp. sometime in the mid 1990s. Today, the New Hope & Ivyland continues to provide scenic tourist excursion passenger trains between New Hope and nearby Lahaska, PA.

In 1983, NBC network anchorwoman Jessica Savitch and her boyfriend drowned after their car overturned into the Delaware Canal. The canal passes by Odette's Restaurant, where the couple had dined on a rainy evening when visibility was poor and warning signs were easily missed.

In 2004 and 2006, New Hope was the victim of flooding when the Delaware River overflowed its banks. On both occasions, the downtown businesses reopened within several days; however, many riverside homes remained severely damaged for significantly longer. Compared to the Great Flood of 1955, the 2004 and 2006 floods did not cause severe damage or fatalities. 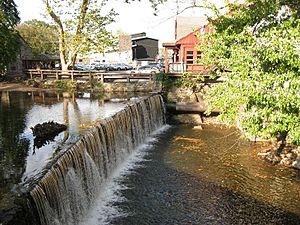 Waterfall and millpond at Aquetong Creek

The borough is located at the confluence of the Delaware River and Aquetong (Ingham) Creek, which begins its two-mile course in neighboring Solebury Township at Ingham Springs, the most productive spring in Southeastern Pennsylvania. The name Aquetong comes from a Lenape word meaning "spring in the bushes," while Ingham refers to Samuel D. Ingham, an industrialist, congressman, and advocate of the canal that would run through the town. Near its end in New Hope, the creek forms a scenic millpond and waterfall near the Bucks County Playhouse, a former mill.

The surrounding area features low, rolling hills, and consists largely of preserved forest and farmland. Many people whose mailing addresses are in New Hope actually live outside the borough in Solebury.

New Hope has a hot-summer humid continental climate (Dfa.) The hardiness zone borders 6b and 7a.

There were 1,160 households, out of which 16.7% had children under the age of 18 living with them, 35.5% were married couples living together, 4.7% had a female householder with no husband present, and 56.3% were non-families. 41.6% of all households were made up of individuals, and 7.8% had someone living alone who was 65 years of age or older. The average household size was 1.94 and the average family size was 2.74. 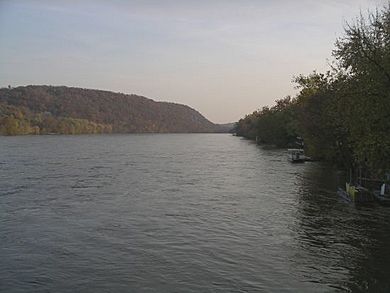 The Delaware River at New Hope 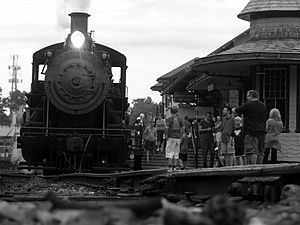 New Hope's primary industry is tourism. On weekends, the streets are crowded with tourists visiting the many restaurants, bikers, antique shops, and art galleries, or taking the popular walk along the river and the Delaware Canal. Compared to surrounding communities, New Hope has a vibrant night life.

New Hope has historically been a popular spot for Broadway shows to be tested and fine tuned, and many notable stage actors bought weekend homes in the area. The Bucks County Playhouse featured a constant stream of plays and musical productions. In December 2010, the Playhouse was shuttered after lenders foreclosed the property. Following an extensive renovation, funded by the Bucks County Playhouse Conservancy, the Bridge Street Foundation, and others, the theater reopened on July 2, 2012.

Just 6 miles north of the spot where George Washington crossed the Delaware, New Hope benefits from many tourists to that site then looking for a place to eat and shop.

New Hope was also home to an art colony, founded by Edward Redfield and William L. Lathrop, that produced important regional work. Other members or associates of the colony included George Sotter, Daniel Garber and Fern Coppedge. They are also associated with the nearby Phillips Mill artists colony.

The area later grew to become a popular gay resort in the 1950s and today New Hope still has an active and large gay community. New Hope also attracts motorcyclists (bikers) on weekends in the warmer months.

New Hope is also a terminal point on the New Hope & Ivyland Railroad. On weekends, tourists can ride the historic and scenic line through Bucks County.

Union Camp Corporation had a bag production facility in New Hope until the mid 1990s, which employed around one hundred people total and was located uphill from the New Hope & Ivyland railroad. The former factory complex, now known as Union Square, has been recycled as a series of shops and businesses aimed at the teeming tourist industry.

In August 2007, Forbes.com named New Hope Borough as one of the best places in the Northeast of the United States to buy a summer vacation home.

In 2010, the New Hope and Lambertville area Chambers of Commerce began an initiative that involved putting on a fireworks show every Friday night during the Summer to increase tourism and merchant revenue. Bars, restaurants and other eateries benefited most directly from the fireworks but residents criticized the weekly event, claiming it took up parking on the streets and disrupted their evenings. In January 2014, the New Hope Chamber of Commerce decided it would no longer hold weekly firework shows citing a rise in shoplifting, Saturday morning cleanup and an overall decline in store traffic and Friday night revenues.

All content from Kiddle encyclopedia articles (including the article images and facts) can be freely used under Attribution-ShareAlike license, unless stated otherwise. Cite this article:
New Hope, Pennsylvania Facts for Kids. Kiddle Encyclopedia.