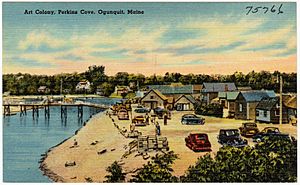 Ogunquit was Maine's largest art colony for the better part of the 20th century. Initially drawn to the landscape, artists later came to study modernism with Robert Laurent and Hamilton Easter Field or "regional impressionism" with Charles Woodbury.

An art colony is a place where artists live and work, interacting with one another, often creating a distinctive style.

Some art colonies are organized through a detailed plan, while others arise as the sum of individual decisions.

The MacDowell Colony is an example where one composer found the rural retreat he owned creatively valuable, and with his spouse set about the project of creating a formal institution to make similar conditions, and interaction within and across disciplines, more feasible throughout the artistic professions.

The Taos art colony in Taos, New Mexico is one example of less directed development. Once artists began settling and working in Taos, others came, art galleries and museums were opened and the area became an artistic center.

One of the largest and most youthful international art colonies in the world today is located in Williamsburg, Brooklyn.

An influential art colony in New York was the Roycroft community.

All content from Kiddle encyclopedia articles (including the article images and facts) can be freely used under Attribution-ShareAlike license, unless stated otherwise. Cite this article:
Art colony Facts for Kids. Kiddle Encyclopedia.