Ogunquit ( oh-GUN-kwit) is a town in York County, Maine. As of the 2010 census, its population was 892. The summer resort's name means "beautiful place by the sea" in the Abenaki Native American language.

Ogunquit, which means "beautiful place by the sea" in the indigenous Abenaki language, was first a village within Wells, which was settled in 1641. The first sawmill here was established in 1686, and shipbuilding developed along the tidal Ogunquit River. Local shipwrights built schooners, brigs and dories.

At what was then called Fish Cove, near the unnavigable Josias River, fishing was a major livelihood. But the cove was unprotected by a headland or breakwater from Atlantic storms, so fishermen had to protect their boats by hauling them ashore each night. Resolving to create a safe anchorage, they formed the Fish Cove Harbor Association, and dug a channel across land they purchased to connect Fish Cove with the Josias River. When the trench was complete, erosion helped to further widen the passage. The resulting tidewater basin is called Perkins Cove, spanned by a manually operated draw footbridge. With a 3½-mile beach of pale sand and dunes forming a barrier peninsula, connected to the mainland in 1888 by bridge across the Ogunquit River, the village was discovered by artists. It became a popular art colony and tourist area. Particularly after 1898, when the Ogunquit Art Colony was established, it was not unusual to see both artists and fishermen working around Perkins Cove. To accommodate summer crowds, several seaside hotels and inns were built. Marginal Way, a scenic trail, runs along the coast from Perkins Cove to Ogunquit Beach. Ogunquit separated from Wells in 1980 and receives visitors from as far as Australia. Part of Stephen King's The Stand, published in 1978, is set in Ogunquit. Ogunquit was named America's Best Coastal Small Town in USA Today's 10 Best Readers' Choice 2016.

Ogunquit has become a destination for LGBT tourists, with numerous LGBT-owned and -operated hotels, restaurants, bars, theaters, and other businesses. Most of the LGBT-oriented businesses are in the village area of the town.

A July 2016 article in Bloomberg cited Ogunquit as one of several Maine coastal destinations being visited by trendsetters and gentrifiers. Major airlines' flights to Portland make Ogunquit as convenient as the Hamptons for New Yorkers.

According to the United States Census Bureau, the town has a total area of 15.25 square miles (39.50 km2), of which, 4.18 square miles (10.83 km2) of it is land and 11.07 square miles (28.67 km2) is water. Ogunquit is drained by the Josias River and Ogunquit River. The highest elevation in town is just over 160 feet (49 m) above sea level, in several locations. The lowest elevation is sea level, along the coastline with the Atlantic Ocean.

Ogunquit’s Marginal Way, a 1.25-mile trail with views of the coast, is neatly paved and the treacherous cliffs are, in places, fenced. The path leads from the downtown shopping area to the fishing village in Perkins Cove, now an outdoor mall of jewelry, clothing, and candle boutiques.

The Ogunquit River at high tide in August 2006

This climatic region is typified by large seasonal temperature differences, with warm to hot (and often humid) summers and cold (sometimes severely cold) winters. According to the Köppen Climate Classification system, Ogunquit has a humid continental climate, abbreviated "Dfb" on climate maps.

There were 498 households, of which 8.6% had children under the age of 18 living with them, 42.0% were married couples living together, 4.0% had a female householder with no husband present, 1.0% had a male householder with no wife present, and 53.0% were non-families. Of all households, 41.2% were made up of individuals, and 20.9% had someone living alone who was 65 years of age or older. The average household size was 1.79 and the average family size was 2.37. 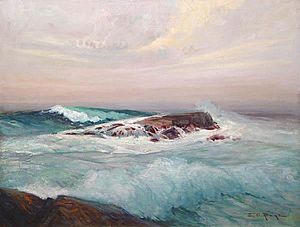 The Wells-Ogunquit Community School District provides education for students of all ages in the coastal southern Maine towns of Wells and Ogunquit.

All content from Kiddle encyclopedia articles (including the article images and facts) can be freely used under Attribution-ShareAlike license, unless stated otherwise. Cite this article:
Ogunquit, Maine Facts for Kids. Kiddle Encyclopedia.