Wells is a town in York County, Maine, United States. Founded in 1643, it is the third-oldest town in Maine. The population in 2010 was 9,589. Wells Beach is a popular summer destination.

The Abenaki Indians called the area Webhannet, meaning "at the clear stream", a reference to the Webhannet River.

Edmund Littlefield, an immigrant from the wool regions of Titchfield, England, built the first gristmill and later a woolen mill on the Webhannet River, becoming known as "The Father of Wells," where a monument commemorates his contribution. In 1622, the Plymouth Company in England awarded to Sir Ferdinando Gorges, Lord Proprietor of Maine, territory which included the Plantation of Wells. His young cousin, Thomas Gorges, acting as deputy and agent, in 1641 granted to Rev. John Wheelwright and other settlers from Exeter, New Hampshire the right to populate the land from northeast of the Ogunquit River to southwest of the Kennebunk River. Following the death of the elder Gorges in 1647, the Massachusetts Bay Colony laid claim to Maine. In 1653, Wells was incorporated, the third town in Maine to do so, and named after Wells, England, a small cathedral city in the county of Somerset. It then included Kennebunk, set off the year Maine became a state in 1820, and Ogunquit, designated a village within Wells by the legislature in 1913, then set off in 1980.

Wells was the resilient northeastern frontier of English settlement. Except for a few forts and garrisons, early attempts to colonize Maine above Wells were abandoned because of attacks by Native Americans allied with New France, which resented encroachment by New England in territory it considered its own, Acadia. Wells endured three major attacks, most famously the Raid on Wells in 1692. The region became less dangerous, however, after the Battle of Louisburg in 1745.

The town developed as a farming community, producing hay and vegetables. Other industries included shipbuilding and fisheries. In the 19th century, with the arrival of the railroad, the town's beautiful beaches attracted tourists. Many inns and hotels were built along the seashore. Today, tourism remains important to the economy. 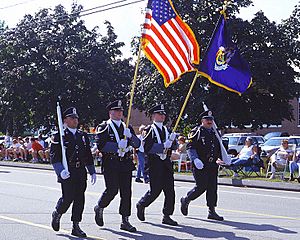 Wells celebrated its 350th anniversary in 2003. The year-long celebration included a New Year's Eve party with fireworks, parade, a visit by the traveling Russian circus, concerts, historical reenactments, and more. The town commissioned a member of the celebration committee, Kristi Borst, to design a town flag. Her design portrays historic aspects of the Town's settlement and agriculture as well as the 2003 Town Hall and focus on tourism represented by a train. Also included is the motto she penned for the project: "Proud of our Past, Ready for our Future". 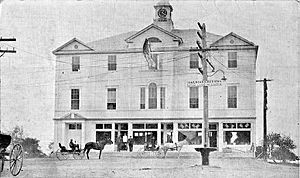 According to the United States Census Bureau, the town has a total area of 73.61 square miles (190.65 km2), of which, 57.55 square miles (149.05 km2) of it is land and 16.06 square miles (41.60 km2) is water. Wells is drained by the Webhannet River. The highest point in town is an unnamed hill located a half mile south of the intersection of State Route 9 and Bragdon Road, which is 360 feet (110 m) above sea level. The lowest elevation is sea level, along the coastline with the Atlantic Ocean.

Wells is part of the Portland-South Portland-Biddeford Metropolitan Statistical Area. 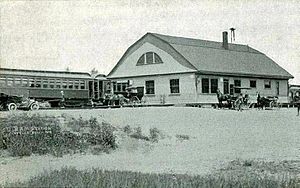 There are several transportation corridors connecting Wells with other communities:

Access to the Amtrak national passenger rail system is available at the Wells Regional Transportation Center, which is served by 10 Downeaster trains per day. The center has a park and ride lot and is adjacent to the I-95 interchange. 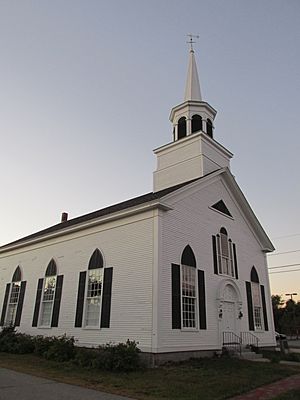 Church of the Nazarene 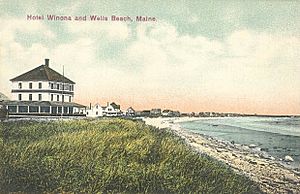 There were 4,120 households, of which 24.5% had children under the age of 18 living with them, 54.6% were married couples living together, 8.1% had a female householder with no husband present, 3.6% had a male householder with no wife present, and 33.6% were non-families. 26.2% of all households were made up of individuals, and 11.4% had someone living alone who was 65 years of age or older. The average household size was 2.30 and the average family size was 2.77. 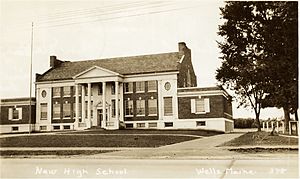 Wells is a member of the Wells-Ogunquit Community School District. 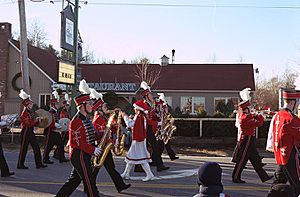 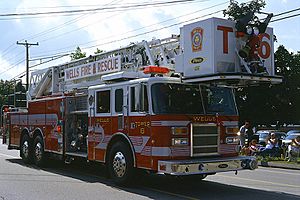 All content from Kiddle encyclopedia articles (including the article images and facts) can be freely used under Attribution-ShareAlike license, unless stated otherwise. Cite this article:
Wells, Maine Facts for Kids. Kiddle Encyclopedia.