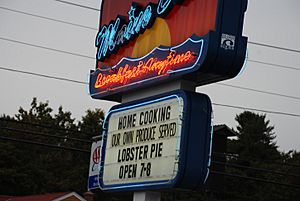 The Maine Diner is a diner in Wells, Maine. It serves breakfast, lunch, and dinner. The diner, which has a seating capacity of 90 and a year-round staff of about 60, serves an average of 1,200 to 1,500 patrons on a peak summer day. The restaurant is known for its seafood chowder and lobster pie and other Down East fare. It serves breakfast all day. Many of its vegetables and herbs come from a garden behind the building. 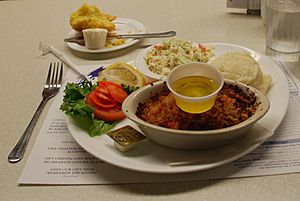 Lobster pie as served at the Maine Diner

Socrates "Soky" Toton, an Albanian immigrant, purchased the original Maine Diner in the early 1950s. Toton did the cooking and his wife Margaret waited on tables along with another full-time waitress, Millie, and two part-time waitresses. The Maine Diner became well known for their made-from-scratch food; they grew much of their own produce behind the diner.

During the mid-1950s, the old building was moved and a new building was built. The Totons lived next to the Diner, in the house that is now the diner's gift shop. The diner was open year-round until Margaret died in 1966. After she died, Toton closed the restaurant for a year. After that, Toton opened the diner from Labor Day to Memorial Day and closed it for the summer.

Toton ran the diner until he had a heart attack in January 1980; he died the following month.

Brothers Myles and Dick Henry purchased the Diner in 1983. Their first customer was a man who crashed into a pole near the parking lot. He had mistaken the diner for a bar he was looking for. Myles died in 2010. The diner is managed by Jim MacNeill.

All content from Kiddle encyclopedia articles (including the article images and facts) can be freely used under Attribution-ShareAlike license, unless stated otherwise. Cite this article:
Maine Diner Facts for Kids. Kiddle Encyclopedia.