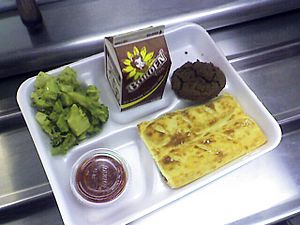 A common school lunch in the United States of America.

Luncheon, usually simply called lunch, is a meal that is usually eaten around noon or in the early afternoon. In most countries, it is the second meal of the day, after breakfast and before dinner.

A lunch can be cold (bread and fruit) or hot (a full meal, like a dinner).

People that go to work or school during the day, usually have lunch together with their coworkers or classmates. Some people bring lunch to work or school in a brown paper bag or a lunchbox, but you can also buy lunch at a restaurant.

In some countries, lunch is the most important meal of the day.

The abbreviation lunch is taken from the more formal Northern English word luncheon, which is derived from the Anglo-Saxon word nuncheon or nunchin meaning 'noon drink'. The term has been in common use since 1823.

A traditional Bengali lunch is a seven-course meal. Bengali cuisine is a culinary style originating in Bengal, a region in the eastern part of the Indian subcontinent, which is now divided between Bangladesh and West Bengal. The first course is shukto, which is a mix of vegetables cooked with few spices and topped with a coconut sauce. The second course consists of rice, dal, and a vegetable curry. The third course consists of rice and fish curry. The fourth course is that of rice and meat curry (generally chevon, mutton, chicken or lamb). The fifth course contains sweet preparations like rasgulla, pantua, rajbhog, sandesh, etc. The sixth course consists of payesh or mishti doi (sweet yogurt). The seventh course is that of paan, which acts as a mouth freshener.

In China today, lunch is not nearly as complicated as it was before industrialisation. Rice, noodles and other mixed hot foods are often eaten, either at a restaurant or brought in a container. Western cuisine is not uncommon. 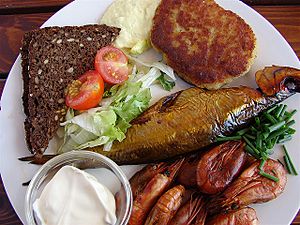 A lunch on the Danish island of Bornholm 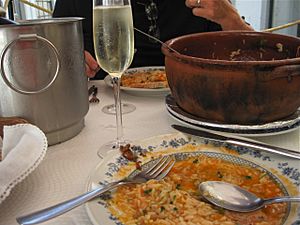 Lunch in Denmark, referred to as frokost, is a light meal. Often it includes rye bread with different toppings such as liver pâté, herring, and cheese. Smørrebrød is a Danish lunch delicacy that is often used for business meetings or special events.

In Finland, lunch is a full hot meal, served as one course, sometimes with small salads and desserts. Dishes are diverse, ranging from meat or fish courses to soups that are heavy enough to constitute a meal.

In France, the midday meal is taken between noon and 2:00 pm.

In Germany lunch is the main meal of the day. It is traditionally a substantial hot meal, sometimes with additional courses like soup and dessert. It is usually a savoury dish, consisting of protein (e.g., meat), starchy foods (e.g., potatoes) and vegetables or salad. Casseroles and stews are popular as well. There are a few sweet dishes like Germknödel or rice pudding that can serve as a main course, too. Lunch is called Mittagessen – literally, "midday's food".

In the Netherlands, Belgium and Norway, it is common to eat sandwiches for lunch: slices of bread that people usually carry to work or school and eat in the canteen. The slices of bread are usually filled with sweet or savoury foodstuffs such as chocolate sprinkles (vlokken), apple syrup, peanut butter, slices of meat, cheese or kroket. The meal typically includes coffee, milk or juice, and sometimes yogurt, some fruit or soup. It is eaten around noon, during a lunch break.

In Portugal, lunch (almoço in Portuguese) consists of a full hot meal, similar to dinner, normally with soup, a meat or fish course, and dessert. It is served between noon and 2:00 pm. It is the main meal of the day throughout the country with the exceptions of the Metropolitan areas of Lisbon and Porto, where lighter meals or snacks are not uncommon. The Portuguese word lanches derives from the English word "lunch", but it refers to a lighter meal or snack taken during the afternoon (around 5 pm) due to the fact that, traditionally, Portuguese dinner is served at a later hour than in English-speaking countries.

In Spain, the midday meal, "lunch" takes place between 1:00 pm and 3:00 pm and is effectively dinner, (the main meal of the day); in contrast, supper does not usually begin until between 8:30 pm and 10:00 pm. Being the main meal of the day everywhere, it usually consists of a three-course meal: the first course usually consists of an appetizer; the main course of a more elaborate dish, usually meat- or fish-based; the dessert of something sweet, often accompanied by a coffee or small amounts of spirits. Most places of work have a complete restaurant with a lunch break of a least an hour. Spanish schools have a complete restaurant as well, and students have a one-hour break. Three courses are common practice at home, workplace, and schools. Most small shops close for between two and four hours – usually between 1:30 pm to 4:30 pm – to allow to go home for a full lunch.

In Sweden, lunch is usually a full hot meal, much as in Finland.

In the United Kingdom, lunch is often a small meal, designed to stave off hunger until returning home from work and eating dinner. It is usually eaten early in the afternoon. Lunch is often purveyed and consumed in pubs. Pub lunch dishes include fish and chips, ploughman's lunch and others.

In Hungary, lunch is traditionally the main meal of the day, following a leves (soup).

In Poland the main meal of the day (called obiad) is traditionally eaten between 1:00 pm and 5:00 pm, and consists of a soup and a main dish. Most Poles equate the English word "lunch" with "obiad" because it is the second of the three main meals of the day; śniadanie (breakfast), obiad (lunch/dinner) and kolacja (dinner/supper). There is another meal eaten by some called drugie śniadanie, which means "second breakfast". Drugie śniadanie is eaten around 10:00 am and is a light snack, usually consisting of sandwiches, salad or a thin soup.

In Russia, the midday meal is taken in the afternoon. Usually, lunch is the biggest meal and consists of a first course, usually a soup, and a second course which would be meat and a garnish. Tea is standard.

In Bosnia and Herzegovina, lunch is the main meal of the day. It is traditionally a substantial hot meal, sometimes with additional courses like soup and dessert. It is usually a savoury dish, consisting of protein (such as meat), starchy foods (such as potatoes), and a vegetable or salad. It is usually eaten around 2:00 pm.

In Romania, lunch (prânz in Romanian) is the main hot meal of the day. It is usually eaten at 12:00, but never later than 3:00 pm. Lunch normally consists of two dishes: usually, the first course is a light soup and the second course, the main course, often consists of meat accompanied by potato, rice or pasta (garnitură) Traditionally, people used to bake and eat desserts, but nowadays it is less common. On Sundays, the lunch is more consistent and is usually accompanied by an appetiser or salad. 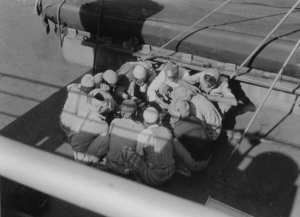 Arab port workers aboard a cargo ship during their common lunch, 1958

In the Middle East and in most Arab countries, lunch is eaten between 1:00 pm and 4:00 pm and is the main meal of the day. It usually consists of meat, rice, vegetables and sauces and is sometimes but not always followed by dessert. Lunch is also eaten as a light meal at times in the Middle East, such as when children arrive at home from school while the parents are still out working. Water is commonly served, which may be iced, and other beverages such as soft drinks or yogurt drinks are also consumed.

In the United States and Canada, lunch is usually a moderately sized meal generally eaten around noon. During the work week, North Americans generally eat a quick lunch that often includes some type of sandwich, soup, or leftovers from the previous night's dinner (e.g., rice or pasta).

Children often bring packed lunches to school, which might consist of a sandwich such as bologna (or other cold cut) and cheese, tuna, chicken, or peanut butter and jelly, or, in Canada, savoury pie, as well as some fruit, chips, dessert and a drink such as juice, milk, or water.

Adults may leave work to go out for a quick lunch, which might include some type of hot or cold sandwich such as a hamburger or "sub" sandwich. Salads and soups are also common, as well as a soup and sandwich, tacos, burritos, sushi, bento boxes, and pizza. Some individuals may pack leftovers for lunch.

Lunch may be consumed at various types of restaurants, such as formal, fast casual and fast food restaurants. Canadians and Americans generally do not go home for lunch, and lunch rarely lasts more than an hour except for business lunches, which may last longer.

In Mexico, lunch (Comida) is usually the main meal of the day and normally takes place between 2:00 pm and 4:00 pm. It usually includes three or four courses: the first is an entrée of rice, noodles or pasta, but also may include a soup or salad. The second consists of a main dish, called a guisado, served with one or two side dishes such as refried beans, cooked vegetables, rice or salad. The main dish is accompanied by tortillas or a bread called bolillo. The third course is a combination of a traditional dessert or sweet, café de olla, and a digestif. During the meal, it is usual to drink aguas frescas, although soft drinks have gained ground in recent years. 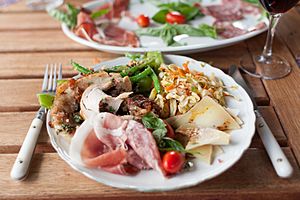 A lunch of assorted foods in Australia

In Australia, a light meal eaten in the period between 10:30 am and noon is considered brunch; an actual lunch will be eaten between 12 and 2PM. While usually consisting of fruit or a cereal product, a typical Australian brunch may include other foods as well such as burgers, sandwiches, other light food items, and hot dishes. Sometimes a meal during the late afternoon is referred to as "afternoon tea", a meal in which food portions are usually significantly smaller than at lunch, sometimes consisting of nothing more than coffee or other beverages. 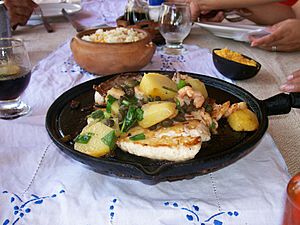 In Argentina, lunch is usually the main meal of the day, and normally takes place between noon and 2:00 p.m. People usually eat a wide variety of foods, such as chicken, beef, pasta, salads, and a drink like water, soda or wine, and some dessert. Although at work, people usually take a fast meal which can consist of a sandwich brought from home or bought as fast food.

In Brazil, lunch is the main meal of the day, taking place between 11:30 a.m. and 2:00 p.m. Brazilians basically eat rice with beans, salad, french fries, some kind of meat or pasta dishes. But the kind of food may vary from region to region.

Since lunch typically falls in the early-middle of the working day, it can either be eaten on a break from work, or as part of the workday. The difference between those who work through lunch and those who take it off could be a matter of cultural, social class, bargaining power, or the nature of the work. Also, to simplify matters, some cultures refer to meal breaks at work as "lunch" no matter when they occur – even in the middle of the night. This is especially true for jobs that have employees that rotate shifts.

All content from Kiddle encyclopedia articles (including the article images and facts) can be freely used under Attribution-ShareAlike license, unless stated otherwise. Cite this article:
Lunch Facts for Kids. Kiddle Encyclopedia.