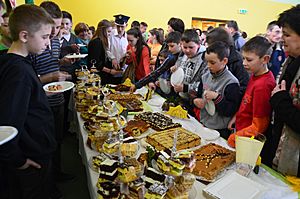 Buffet at festival in school 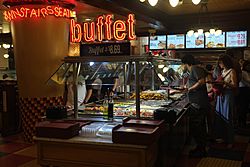 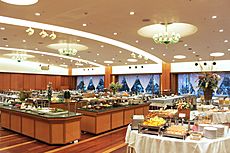 A breakfast buffet in Japanese Hotel

A buffet is a serve-yourself food system.

Food is placed in a public area where the diners choose what they want.

Buffets are now usual in many hotels for breakfast, and sometimes for other meals. They are also common at social events, where people stand up to eat and talk.

Buffet restaurants usually offer all-you-can-eat food for a set price. Buffets usually have some hot dishes. The term cold buffet (see Smörgåsbord) has been developed to describe buffets lacking hot food. Hot or cold buffets usually involve dishware and utensils, but a finger buffet is designed for small pieces taken by hand, such as cupcakes, slices of pizza, foods on cocktail sticks, etc.

The essential feature of the various buffet formats is that the diners can see the food and immediately select which dishes they wish to eat, and usually also can decide how much food they take. Buffets are effective for serving large numbers of people at once, and are often seen in institutional settings, such as business conventions or large parties.

Buffets grade into cafeterias when there is a serving counter and the customer moves with a tray along a track.

All content from Kiddle encyclopedia articles (including the article images and facts) can be freely used under Attribution-ShareAlike license, unless stated otherwise. Cite this article:
Buffet Facts for Kids. Kiddle Encyclopedia.