Americus Hotel is a historic hotel located at Allentown, Lehigh County, Pennsylvania. It was built in 1926-1927, and is a 13-story yellow brick building. The building re-opened in the fall of 2016

The Americus is a classic 1920s Jazz-Age hotel built by a group of Allentown businessmen who wanted a first-class hotel in the central business district. It was not to be palatial private "pleasure dome" like those of the 19th-century robber barons. Rather, it would be a hotel, a public facility that provided the best that world-class service and up-to-date technology could offer. 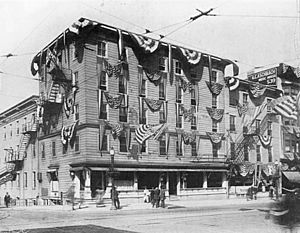 The site of the Americus Hotel had been used as a hotel since 1810, when the population of Allentown (then known as Northampton) was about 700. In that year, Abraham Gangawere built a two-story tavern on the northeastern corner of 6th and Hamilton Streets. Later, under the ownership of Charles Seagraves, one of the leading men of 19th-century Allentown, the inn was enlarged and renamed the Northampton Inn. In 1837, President Martin Van Buren had slept there.

The stagecoach line, of which Seagraves was one of the owners, made its headquarters there. By the time of World War I, now known as the American Hotel, the hotel was expanded in size to five stories. It was noted for its excellent cuisine and was used frequently by local salesmen and the traveling public.

But since its heyday in the 19th century, the old hotel had gone to seed. When Aaron Potruch purchased the lot from George W. Seagreaves' estate for $500,000, he planned an office building. In 1924, he cleared the ground and tore down the hotel, but about a month later, Potruch was contacted by Gomery. At the time Gomery made the suggestion, the idea of a new hotel was something of a local joke. Over the years, according to press accounts, many new hotels had been proposed but never built.

In 1925, Albert D. "Bert" Gomery, as he was known to his friends, was president of Allentown's Chamber of Commerce. Born in Lehighton, the 50-year-old businessman had come to the city in 1894. With his brother J. Edgar, he had built the wholesale produce firm of Gomery Brothers into a prosperous company. In 1917, Gomery had branched out by purchasing from the Allentown College for Women (later Cedar Crest College) its building at 4th and Turner streets. This he converted into the College Hotel.

But unlike other builders, Gomery was leaving nothing to chance. Marshaling the full weight of his business influence, he formed a company with his brother, who was now co-partner with fellow Allentonian John C. Schwartz in Gomery & Schwartz of Philadelphia. This partnership was the agent for the Hudson Motor Car Co. in eastern Pennsylvania, New Jersey and Delaware. Also included was Allentown National Bank cashier Frank Cressman. Along with W.A. Gibson of Philadelphia, they created the American Hotel Realty Co.

That winter, after an architectural competition, the Philadelphia firm of Ritter and Shay was awarded the contract. Their plans called for a 270-bedroom structure. After the first round of bids was submitted, Gomery found them too high. The process was repeated. After negotiations, the two sides reached a compromise: two more floors were added, giving a total of 324 bedrooms. Presumably this was done to increase the number of less-expensive rooms, thus making the hotel more attractive to business travelers.

In June 1926, the construction contract was awarded to the Philadelphia firm of Roberts and Roller. The work crews dug a new hole for the foundation, but work on the new building did not actually begin until July 17, 1926. As the weeks passed, the rigid steel skeleton of the Americus began to rise. At first, it was nothing more than a clatter of riveting jackhammers. But on the street level, its outline began to take shape. With its buff-colored brick, curved Romanesque arches and romantic if somewhat superfluous balconies, it echoed Coolidge-era America's passion for the exotic world of old Spain.

Construction went ahead rapidly. Gomery had promised that the building would be finished by Sept. 10, 1927, but things did not always run smoothly. First, there were some problems with the foundation. The high cost of materials brought more delays. But Gomery would not rest. He oversaw every detail down to the commission of Philadelphia artist George Harding to do the large murals for the hotel. 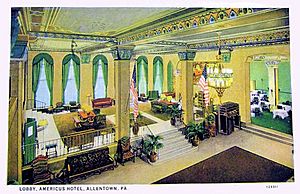 Lobby of the Americus Hotel, 1928 as shown in postcard of the era

Despite all the delays, the Americus Hotel opened for business only three days behind schedule. On Sept. 13, 1927. In the newspapers of the day, it was reported that the hotel lounge was sunlit through large, full-length windows. The light reflected off the colorful tiles onto the overstuffed sofas and chairs. On the wall was a painting of a Spanish dancing girl, which "affords a suggestion of the life of entertainment," noted the Call, ". . . that attend life in the hotel for the weary traveler. In the kitchen, the gleam of pots and pans was evident even in the fuzzy newspaper photos. The kitchen's staff of 22 promised to hum like a well-oiled watch. Swiss chef Werner Kloetzli, "formerly of the Palmer House, Chicago," and maitre d'hotel Frederick Botta, who had known each other for years, "assured a cuisine that is second to none in the country," said the newspaper. It was written that as soon as one entered the building one felt a "changed atmosphere." It was "an air of refinement, just a little bit different, that persists on intruding itself as the splendor of the surroundings unfolds." The highly polished walnut furniture, the travertine marble floors, the colorful Harding murals and the polychrome chandeliers created a mood in which one could "visualize the glories of old Spain.

The official opening took place on the evening of September 13th. Reservations had been made in advance, but when the guest list hit 700, others had to be turned away. At 6:30 p.m., the guests, many in tuxedos and evening gowns, arrived to make an inspection tour of the hotel. Floral displays at strategic locations added to the Spanish garden atmosphere. Serenaded by a 28-piece orchestra directed by Albertus Meyers, the guests gathered in the hotel's dining room. Outside of the hotel, on North 6th Street, a series of storefronts were rented to various small businesses, such as tailor shops, watch repair, and the like.

For the next 40 years, the Americus Hotel was a centerpiece of the downtown business and retail district of Allentown. Many celebrities and notable people who visited the city stayed there, and it was common for the hotel to hold various receptions, balls, and high school graduation proms in its ballroom.

In the late 1970s, as the downtown area of Allentown began to change and decline, the fortunes of the hotel mirrored those of the city. It was added to the National Register of Historic Places on August 23, 1984. Its owners, the Moffa family signed an agreement with developers to sell the hotel for $2 million which included tax credits for restoring a building's original character.

On August 7, 1985, the Moffa family sold the property to 29-year-old Mark Mendelson who bought the hotel from Albert and Anna Moffa for $1.25 million. Equibank provided the loan for the mortgage. Mendelson, who once described himself as a high school dropout who began working in Philadelphia's Italian Market as a preteen, brought hustle, aggressiveness and an eye toward underperforming properties to find bargain real estate. Former Allentown Mayor Joseph Daddona at that time called the deal "the most exciting thing in this part of town in many years."

City construction permit records show that Mendelson spent hundreds of thousands on renovations, not including amenities such as new furniture or improvements that didn't require permits. Mendelson said he invested millions in the hotel. The results showed, notably in the hotel's dining room and ballrooms. Preservation organizations gave awards to Mendelson. The hotel further bolstered its image in 1988 by taking on the nameplate of the Radisson Hotel chain.

Only in his early 30s, Mendelson, by then a father of four, had already acquired the vacation lodge in Lower Towamensing Township and was poised to make two big deals in Philadelphia. By this time, Mendelson testified in a 1987 case, he owned perhaps 30 vehicles, including a boat and motorcycle. But it also was around this time that private businesses and public agencies began finding themselves in court with the Americus Center Inc. A handful of cases in 1986 and 1987 turned into dozens by 1990.

Things got so bad that in 1994 the Americus lost its affiliation with Radisson over late payments and bounced checks. Then, with nearly $5 million in liens against the hotel, it went to tax sale. Mendelson gambled that no one would bid on the property — thus becoming responsible for the unpaid bills — and won. At that time, Mendelson began to make amends by paying some of the hotel's back taxes. Nevertheless, the Americus continued to spiral downward. The hotel went under the umbrella of the Clarion chain in 1995; by 1998 the Clarion affiliation was over. Broken elevators, leaky plumbing and accumulating garbage forced city inspectors to pull the hotel's health license. In August 2002, after a series of fires, broken pipes, and elevator failures, the City of Allentown revoked the occupation permit of the hotel and its residents were forced to vacate the property.

During the mid 2000s, a series of legal battles between Mendleson and the city ensued with the hotel standing vacant in a deteriorated state. Unpaid assessments to the Downtown Improvement District Authority piled up to $21,744. With back taxes and fines totaling about $37,000 and a water and sewer bill of nearly $145,000 against Americus Center Inc., Allentown officials again said they were targeting the property for sheriff's sale.

Scaffolding and canvas was erected on the sidewalk both on Hamilton Street as well as North 6th Street to prevent falling masonry from injuring pedestrians. Also the storefront businesses on North 6th Street were ordered to close due to the deteriorating condition of the building. The city ordered utilities cut in 2005, and in 2007 it was ordered sealed to keep vagrants out of the property. In 2009, Mendleson filed for Chapter 11 bankruptcy and the hotel became owned by the City of Allentown, who held a $600,000 tax lien on the property.

In 2009, Albert Abdouche, a local businessman obtained ownership of the hotel from the City for $676,000, and announced re-development plans. Trash was everywhere, the interior of the landmark was falling apart and the wiring was nothing short of a disaster. Abdouche spent $3.2 million to obtain the property and started improving it in February 2010. Over the next few years the exterior was repaired and much work was performed on the interior. In 2014 Abdouche applied for funding from the Allentown Neighborhood Improvement Zone (NIZ) Development Authority.

In February 2014, the project received a tentative go-ahead with $13.2 million in NIZ tax revenues for the project that will include 85 hotel rooms, 48 apartments, 10 retail storefronts, commercial office space, a street-level sports bar and other restaurants. In return, Abdouche agreed to an independent review of the project to ensure his construction estimates are correct, and that he be required to post a bond so, if the costs prove higher than projected, the Directors of the NIZ can seek another developer to finish the project.

All content from Kiddle encyclopedia articles (including the article images and facts) can be freely used under Attribution-ShareAlike license, unless stated otherwise. Cite this article:
Americus Hotel Facts for Kids. Kiddle Encyclopedia.