Sanford is a city in York County, Maine, United States. The population was 20,798 in the 2010 census, making it the seventh largest municipality in the state. Situated on the Mousam River, Sanford includes the village of Springvale. The city features many lakes in wooded areas which attract campers.

On November 6, 2012, Sanford voters approved a new charter to re-incorporate Sanford as a city and replace the town meeting format with a city council/mayor/strong manager form of government, along with other changes. The new charter took effect on January 1, 2013. Sanford's new charter provides that the first mayor would be appointed from the ranks of Sanford's seven city councilors and serve interim for one-year period. On January 8, 2013, Maura A. Herlihy was appointed as Sanford's first mayor.

In 2014, an elected-at-large mayor would take office and serve a three-year initial first term. On November 5, 2013, Thomas Cote was elected as mayor.

Beginning in 2016, the mayoral position will be elected at-large every two years during legislative election cycles.

Sanford is in the western portion of a tract of land purchased in 1661 from Abenaki Chief Fluellin by Major William Phillips, an owner of mills in Saco. First called Phillipstown, it was willed in 1696 by Mrs. Phillips to her former husband's son, Peleg Sanford. Settlement was delayed, however, by hostilities during the French and Indian Wars. In 1724, Norridgewock, an enemy stronghold on the Kennebec River, was destroyed by a Massachusetts militia. Subsequently, the region became less dangerous, and Sanford was first settled in 1739. Incorporated a town in 1768, it was named after Peleg Sanford. Until 1794, Alfred was the town's North Parish.

The Mousam River provided water power for industry. In 1745, Capt. Market Morrison built a sawmill above Springvale. Following the Civil War, Sanford developed into a textile manufacturing center, connected to markets by the Portland and Rochester Railroad. Factories were built at both Springvale and Sanford villages. Products included cotton and woolen goods, carpets, shoes and lumber.

In 1867, British-born Thomas Goodall established the Goodall Mills at Sanford, after selling another mill in 1865 at Troy, New Hampshire which made woolen blankets contoured to fit horses. His factory beside the Mousam River first manufactured carriage robes and blankets. It would expand to make mohair plush for upholstering railroad seats, carpets, draperies, auto fabrics, military uniform fabric and Palm Beach fabric for summer suits. 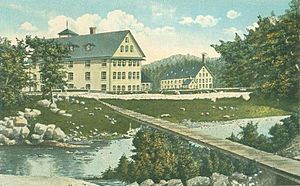 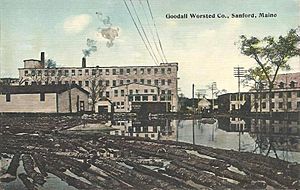 The company's textiles were known for brilliant and fast colors, and found buyers worldwide. From 1880 to 1910, the mill town's population swelled from 2,700 to over 9,000, some living in houses built by the company and sold to workers at cost. In 1914, the Goodall family built Goodall Park, a 784-seat roofed stadium, now a treasured historic site. They also helped build the library, town hall, hospital, airport and golf club. A bronze statue was erected by the citizens of Sanford in 1917 to the memory of Thomas Goodall. His effigy has a place of honor in Central Park. George and Henrietta Goodall's daughter, Marion C. Goodall Marland, and her husband William Marland, continued the Goodall family philanthropy. A dormitory at Nasson College bears the Marland's name.

In 1954, Burlington Mills, then the nation's largest textile firm, bought Sanford Mills. After moving the looms to its Southern plants, Burlington closed Sanford Mills—leaving 3,600 unemployed and 2,000,000 square feet (190,000 m2) of empty mills. Local business owners began traveling the northeast, enticing new employers to move to the area. Life Magazine called Sanford "the town that refused to die." It now has diversified industries, including the manufacture of aircraft parts. When the federal government offered money in the 1960s for urban renewal to rehabilitate aging or blighted districts, more than thirty Sanford structures were razed. In Springvale, three of four corners were leveled. Nevertheless, much fine architecture from the town's prosperous mill era survived.

Sanford was the home of Belle Ashton Leavitt, the third woman attorney admitted to the Maine Bar Association. Leavitt was admitted to the Bar in 1900. Leavitt operated in partnership with attorney Fred J. Allen, her brother-in-law (Allen was married to Belle's sister Ida Leavitt), and member of the Maine Legislature.

In 2003, a proposal to build a $650 million casino in South Sanford was rejected by Maine voters. The 362-acre (1.46 km2) development, ostensibly owned by the Penobscot and Passamaquoddy nations, would have encompassed 4,000 slot machines, 180 gaming tables, a hotel, a 60,000-square-foot (5,600 m2) convention center and an 18-hole golf course. Proponents argued that it would add 4,700 permanent jobs and 25% of revenue would be directed to the state. Detractors predicted higher crime, traffic and an erosion of Maine's quality of life.

There were 8,500 households of which 30.6% had children under the age of 18 living with them, 44.7% were married couples living together, 13.1% had a female householder with no husband present, 5.9% had a male householder with no wife present, and 36.3% were non-families. 28.9% of all households were made up of individuals and 11.2% had someone living alone who was 65 years of age or older. The average household size was 2.41 and the average family size was 2.91.

There were 8,270 households out of which 33.7% had children under the age of 18 living with them, 48.5% were married couples living together, 12.7% had a female householder with no husband present, and 34.1% were non-families. 27.6% of all households were made up of individuals and 11.7% had someone living alone who was 65 years of age or older. The average household size was 2.48 and the average family size was 3.01.

All content from Kiddle encyclopedia articles (including the article images and facts) can be freely used under Attribution-ShareAlike license, unless stated otherwise. Cite this article:
Sanford, Maine Facts for Kids. Kiddle Encyclopedia.