Alfred is a town in York County, Maine, in the United States. As of the 2010 census, the town population was 3,019. Alfred is the county seat of York County and home to part of the Massabesic Experimental Forest. National Register of Historic Places has two listings in the town, the Alfred Historic District, with 48 houses, and the Alfred Shaker Historic District.

The York County Jail is located in Alfred at 1 Layman Way. The jail houses inmates serving terms less than 9 months and those awaiting trial for crimes committed in York county.

Alfred is also home to the York county courthouse, at 45 Kennebunk road. Violations and crimes committed in York county get processed here.

Finally, Alfred houses the York county shelter, where the homeless and those needing assistance in York county live and work. They have a bakery that sells baked goods to the public to help financially support themselves.

Abenaki Native Americans called the area Massabesic, meaning "large pond," or "the place of much water." It was in the western portion of a large tract of land purchased from Indian chiefs Fluellin, Hombinowitt and Meeksombe (also known as Captain Sunday), between 1661 and 1664 by Major William Phillips, an owner of mills in Saco (which then included Biddeford). According to historian Jim Brunelle, editor of the Maine Almanac, the price was "two large blankets, two gallons of rum, two pounds of powder, four pounds of musket balls, 20 strings of beads and several other articles."

Simeon Coffin of Newbury, Massachusetts arrived in 1764 and lived for a time in a wigwam, although the first permanent settlement took place in 1770. Known as the north parish of Sanford, the community was set off and incorporated as a district on February 4, 1794. Sawmills and gristmills operated by water power at the streams. A log jail was built in 1803, with a brick jail in 1869. The courthouse was built in 1806, the year Alfred became the shire town of York County. It was incorporated as a town in 1808, named in honor of King Alfred the Great. Land would be set off to Sanford in 1828, and annexed from Waterboro in 1847. The Rochester & Portland Railroad entered from Waterboro in 1864, connecting to Rochester, New Hampshire in 1871. More than 30 trains passed through Alfred daily between 1910 and 1920, but use would decline in the age of automobiles. Passenger service ceased in 1949, with the final train departing in 1961. A severe drought in Maine tindered the Great Fires of 1947, burning 4,500 acres (18 km2) of woodland and two residences in the town. 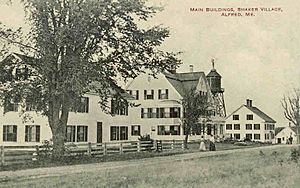 A Shaker religious community once thrived in Alfred (now the Alfred Shaker Historic District). In 1783, members of the Shaker Church settled on the hill near Massabesic (now Shaker) Pond. Others dubbed them the "Merry Dancers," because of their ecstatic worship. "They were," as historian George J. Varney writes, "at this time fanatical in religion and intemperate in their indulgences."

In 1872, the District No. 5 School was built in northern Alfred. It was used as a school until 1921, thereafter providing a number of community functions. It was listed on the National Register of Historic Places in 2009.

In 1873 Louis H. F. Wagner rowed out to Smuttynose Island in the Isles of Shoals, off the Atlantic coast near Kittery, intending to rob but eventually murdering two of the three women left alone on the island. When the authorities finally caught up with him, jurisdiction for the case was given to York County and the county seat, Alfred. The biggest trial in the state at that time was held in the Alfred Court House.

Wagner having little defense was quickly found guilty and sentenced to be hanged on the gallows of the Maine State Prison at Thomaston. While he was awaiting transfer he broke out of the Alfred jail and made his escape, eventually being caught in Farmington, New Hampshire. 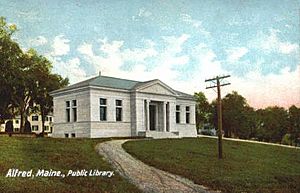 Parsons Memorial Library in 1906, donated to the town in 1905 by George and Edwin Parsons

There were 1,175 households of which 25.2% had children under the age of 18 living with them, 53.2% were married couples living together, 7.9% had a female householder with no husband present, 4.3% had a male householder with no wife present, and 34.6% were non-families. 27.3% of all households were made up of individuals and 13.5% had someone living alone who was 65 years of age or older. The average household size was 2.33 and the average family size was 2.80.

All content from Kiddle encyclopedia articles (including the article images and facts) can be freely used under Attribution-ShareAlike license, unless stated otherwise. Cite this article:
Alfred, Maine Facts for Kids. Kiddle Encyclopedia.