Waterboro is a town in York County, Maine, United States. The population was 7,936 at the 2020 census. It is part of the Portland–South Portland–Biddeford, Maine metropolitan statistical area.

The town includes the districts of North (04061), South (04087), and East (04030) Waterboro, in addition to the largest development in southern Maine, Lake Arrowhead Community. The introduction of Maine subdivision regulation, and Maine Planning Boards, is the direct result of the creation of the largest subdivision, Lake Arrowhead Community. The reaction of the Maine State Legislature was mandatory Planning Boards, and subdivision regulation.

Abenaki Indians called the area Massabesic, meaning "the place of much water", a reference to the region's lakes. It was part of an extensive tract of land purchased in 1661 by Major William Phillips of Saco from Chief Fluellin. Known as Massabesic Plantation, it included most of modern-day Waterboro, Alfred and Sanford. Phillips died in 1683, and the plantation eventually passed from his heirs to 10 proprietors. One of those proprietors was Colonel Joshua Waters, for whom the town would be named.

Lumbering began to thrive there about 1764. Captain John Smith from Kittery was the first permanent settler, arriving in 1768. On March 6, 1787, the Massachusetts General Court incorporated the township as Waterborough. In 1790, Old Corners became the site of the Court of General Sessions, although in 1805 the county seat shifted to Alfred. In 1895, the name was shortened to Waterboro.

With land particularly suited for livestock grazing, agriculture became a principal industry. The town had many cattle and dairy farms. The Portland and Rochester Railroad passed through Waterboro and connected to Rochester, New Hampshire in 1871, helping spur development. Rivers and brooks provided water power to operate mills. Several sawmills were established, and by 1886 the town produced about 1,800,000 feet (550,000 m) of lumber annually. Other businesses included the Ossipee Manufacturing Company at the Little Ossipee River, which made blankets, and the Steam Mill Company at South Waterboro, which made wooden boxes. In 1922, the Goodall-Sanford Mills built in Waterboro village a spinning mill, taken over by a patent leather manufacturer that operated from 1939 to 1982.

Fire twice devastated the town. In 1911, a large portion of South Waterboro burned. Then during the Great Fires of 1947, three-quarters of Waterboro's land area burned, including the town center and 90% of the cottages on Little Ossipee Lake. Today, Waterboro's lakes remain a popular recreation area. The town is home to the 2,140-acre (870 ha) Waterboro Barrens, one of the largest and best preserved pitch pine barrens in Maine.

On October 16, 2012, an M4.0 earthquake shook the city and the rest of Maine. It also shook New Hampshire, Massachusetts and most of the New England states. 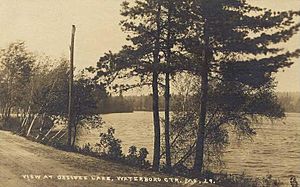 There were 2,775 households, of which 41.1% had children under the age of 18 living with them, 60.8% were married couples living together, 9.5% had a female householder with no husband present, 5.2% had a male householder with no wife present, and 24.5% were non-families. 16.9% of all households were made up of individuals, and 5.2% had someone living alone who was 65 years of age or older. The average household size was 2.77 and the average family size was 3.12.

All content from Kiddle encyclopedia articles (including the article images and facts) can be freely used under Attribution-ShareAlike license, unless stated otherwise. Cite this article:
Waterboro, Maine Facts for Kids. Kiddle Encyclopedia.