Hollis is a town in York County, Maine, United States. The population was 4,281 at the 2010 census. Hollis is a rural bedroom community of Portland and is part of the Portland–South Portland–Biddeford, Maine metropolitan statistical area.

The town of Hollis was originally called Little Falls Plantation, which also encompassed all of the town of Dayton and a small part of Limington, namely the area south of the Little Ossipee River. It was bought in 1664 by Major William Phillips from Hobinowell and Mogg Hegon, sagamores of the local Abenaki Indians. In 1728, the Massachusetts General Court ordered that a combination trading post and stockaded blockhouse be constructed on the Saco River to conduct trade with the Native Americans. It was made crudely of logs and equipped with a cannon. Ten men and a sergeant garrisoned it.

John and Andrew Gordon tried to settle the land in 1754, but were driven away by the Native Americans. On March 27, 1781, the first recorded plantation meeting took place and Joseph Chadbourne was elected moderator. By 1790 the population had grown to 607. The first vote for state office came in 1791, when Little Falls gave John Hancock 27 votes. In 1798, Little Falls was incorporated into Phillipsburg, named in honor of Major Phillips. The first town meeting took place on September 27, 1798, at the home of Stephen Hopkinson. The moderator was Joseph Chadbourne. In 1810 a committee was put together to rename the town, headed by Colonel Isaac Lane and Captain Eben Cleaves. It was finally decided upon the name Hollis. The reasoning behind the name is not known; it is thought to have been inspired by Hollis, New Hampshire, or possibly by the Duke of Newcastle, whose family name was Holles.

Hollis was the closest community to the epicenter of a 4.0 magnitude earthquake felt by many across New England on October 16, 2012. 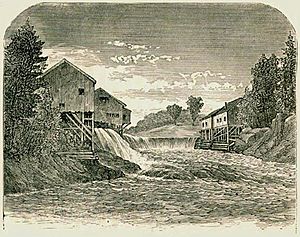 Hollis borders the towns of Limington and Standish to the north, Buxton to the east, Dayton to the south, Lyman to the southwest and Waterboro to its west.

There were 1,668 households, of which 33.5% had children under the age of 18 living with them, 58.2% were married couples living together, 8.9% had a female householder with no husband present, 5.8% had a male householder with no wife present, and 27.1% were non-families. 18.5% of all households were made up of individuals, and 5.6% had someone living alone who was 65 years of age or older. The average household size was 2.56 and the average family size was 2.89.

At 7:12 pm local time, on October 16, 2012, an earthquake originally estimated as a 4.6 magnitude then downgraded to a 4.0 struck Hollis, with its epicenter about 3 miles (5 km) west of the center of town. According to the U.S. Geological Survey, the quake occurred at a depth of 6.6 km (4.1 miles). Some residents reported cracked floors and walls, but there were no reports of major damage. Reports of tremors felt in all six New England states and New York.

With a population slightly above 4,000 and its proximity to Portland, Hollis is growing fast. Many residents commute to jobs in Portland, South Portland, Saco, Biddeford, and Sanford. The few large businesses in Hollis include Eagle Industries, a precision sheet metal shop that employs about 35 and used to also be the main sponsor of FIRST Robotics Competition Team BERT 133 from Bonny Eagle High School. There is also a bottling plant for Poland Spring Water. Many of the local businesses are family-run and well-established in the community.

Paul Penna is the Superintendent of Schools. Trevor Hustus is the Chairman of the Board.

All content from Kiddle encyclopedia articles (including the article images and facts) can be freely used under Attribution-ShareAlike license, unless stated otherwise. Cite this article:
Hollis, Maine Facts for Kids. Kiddle Encyclopedia.