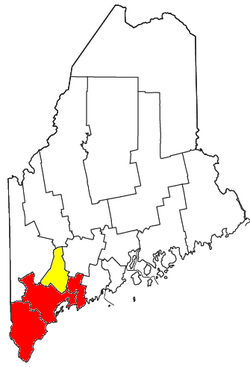 Map of the Portland metropolitan area. The Portland–South Portland–Biddeford MSA is indicated in red. Androscoggin County, shown in yellow, forms the Lewiston–Auburn MSA and is included in the larger Portland–Lewiston–South Portland CSA.

Towns in the three-county MSA are:

Census-designated places in the MSA are:

The MSA includes one unorganized territory, the town of Perkins.

The Portland–Lewiston–South Portland Combined Statistical Area is made up of four counties in Maine. The statistical area includes two metropolitan statistical areas. As of the 2000 Census, the CSA had a population of 591,361 (a July 1, 2009 estimate placed the population at 623,365).

The state of Maine uses NECTAs as one basis for defining labor market areas for purposes of compiling and reporting statistics on employment and unemployment. Labor market area definitions used for the Portland area include the Portland–South Portland–Biddeford Metropolitan Area, the Sanford Micropolitan Area, and the combination of these two areas, known as Portland–South Portland–Sanford combined statistical area.

All content from Kiddle encyclopedia articles (including the article images and facts) can be freely used under Attribution-ShareAlike license, unless stated otherwise. Cite this article:
Portland metropolitan area, Maine Facts for Kids. Kiddle Encyclopedia.