Scarborough is a town in Cumberland County on the southern coast of the U.S. state of Maine. The town is a coastal resort area. Located about 7 miles (11 km) south of Portland, Scarborough is part of the Portland–South Portland–Biddeford, Maine metropolitan statistical area. The population was 22,135 at the 2020 census, making it the most populous town in Maine.

In about 1630, John Stratton opened a trading post on Stratton Island in Saco Bay off Scarborough's shore. In 1631, the Plymouth Council for New England granted the "Black Point Patent" to Captain Thomas Cammock, nephew of the Earl of Warwick. Cammock built a house and began residence in 1635 on the 1,500-acre (6.1 km2) tract of land, which extended from the Spurwink River to Black Point - today this area is known as Prouts Neck. However, he then sold his holdings and moved to the West Indies. Nevertheless, settlements developed at Black Point, Blue Point (i.e., Pine Point), Dunstan (i.e., West Scarborough) and Stratton Island. By 1650, there were fifty homes. The town offered excellent fishing and farming. On July 14, 1658, the Massachusetts General Court incorporated them all as Scarborough, named for Scarborough in Yorkshire, England.

At the outbreak of King Philip's War in 1675, Scarborough was an important coastal settlement with over one hundred houses and one thousand head of cattle. By 1676, the town had been laid to waste as a result of the war - some settlers were killed and others were taken hostage by the Native Americans. Subsequently, Massachusetts sent soldiers accompanied by Indian allies in 1677 to secure the town for resettlement. On June 29, 1677, while pursuing some Indians sent as a ruse, the company was ambushed by warriors under Chief Squando. In the New England militia of nearly one hundred soldiers, fifty to sixty were left dead or mortally wounded. Among the casualties was Captain Benjamin Swett. Called the Battle at Moore's Brook, it was an embarrassing rout for the military. In 1681, a great fort was erected at Black Point. After several attempts to rebuild between guerrilla incursions during King William's War, the survivors evacuated in 1690 and moved south to Portsmouth, New Hampshire or Boston.

A truce was signed in 1699 between the Province of Massachusetts Bay and the Eastern Indians. Resettlement of Scarborough started in 1702 when seven settlers arrived from Lynn, Massachusetts, and construction began on a fort located on the western shore of Prout's Neck's Garrison's Cove. This fort was commanded by Captain John Larrabee.

Despite the treaty, in August 1703, five hundred French and Indians under command of the Sieur de Beaubassin made a sudden descent upon English settlements from Casco Bay (Portland) to Wells. The fort on Prout's Neck sat atop a bluff. When the French and Native Americans arrived, they were protected from gunfire by the overhanging cliff. They subsequently began tunneling into the bluff to breach the fort from below. Had it not been for a two-day downpour that made the disturbed bank slough, exposing the previously hidden excavators to snipers in the fort, the French and Native Americans might have been successful in their attempts to capture the fort and the eight people inside. However, Beaubassin retreated in search of easier prey.

Despite occasional subsequent harassment, the second settlement succeeded. By 1749, it was economically prosperous. Cattle and timber were important local products for export, with Scarborough's many water power sites operating a dozen sawmills. 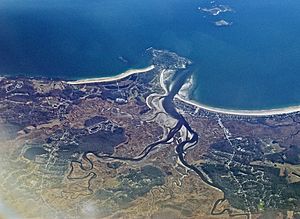 Scarborough from the air, looking to the southeast (December 2015). Note the Prouts Neck Peninsula and the Scarborough River and its tributaries.

According to the United States Census Bureau, the town has a total area of 70.63 square miles (182.93 km2), of which, 47.61 square miles (123.31 km2) is land and 23.02 square miles (59.62 km2) is water. Drained by the Scarborough River, Nonesuch River, Libby River and Spurwink River, the town is situated beside the Gulf of Maine, part of the Atlantic Ocean. The highest point is Beech Ridge, elevation 215 feet (66 m). In early years of Scarborough's settlement bonfires were set on Scottow Hill, elevation 144 feet (44 m), as warnings to the surrounding countryside of approaching danger.

Scarborough is crossed by Interstate 95, Interstate 295, U.S. Route 1, and State Routes 9, 77, 114, and 207. It is bordered by the town of Cape Elizabeth to the northeast, South Portland and Westbrook to the north and northwest, Gorham and Buxton to the west, and Saco and Old Orchard Beach to the south and southwest.

There were 7,506 households, of which 33.0% had children under the age of 18 living with them, 58.0% were married couples living together, 8.0% had a female householder with no husband present, 3.3% had a male householder with no wife present, and 30.7% were non-families. 24.0% of all households were made up of individuals, and 12% had someone living alone who was 65 years of age or older. The average household size was 2.48 and the average family size was 2.97.

Scarborough is home to the headquarters of Hannaford supermarkets.

All content from Kiddle encyclopedia articles (including the article images and facts) can be freely used under Attribution-ShareAlike license, unless stated otherwise. Cite this article:
Scarborough, Maine Facts for Kids. Kiddle Encyclopedia.