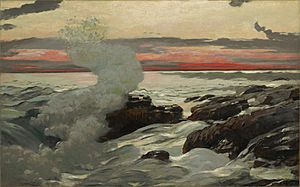 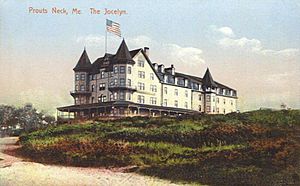 Prouts Neck is a coastal peninsula, located within the town of Scarborough, in southern Maine.

Prouts Neck first appears on a map by Samuel de Champlain from his 1604 explorations of New England. In early times it was known as Black Point because of the dark appearance of its forests. Captain Thomas Cammock, a nephew of the Earl of Warwick was the first European settler of present day Prouts Neck. In 1631, he was granted an area of about 1500 acres by the Plymouth Council for New England which had jurisdiction, granted by the King, over all of New England. Ownership passed through several early families and settled for a time with Timothy Prout, a Boston merchant, who lived there from 1728 to 1768. The name Prout’s Neck became well established, but by 1830 the Libby family had purchased most of the Neck and the name became Libby’s Neck till the late 1870s, by which time most of the Libby land had been sold off to members of the growing summer community and the name reverted to Prouts Neck (more often written without the apostrophe).

Prouts Neck, or just "Prouts" to residents, is a mostly seasonal summer community. The neck itself is not completely gated, but it is well patrolled by local police. The peninsula is almost completely built out, meaning that existing houses sell for a significant premium, and land for new ones is difficult to come by. There are a number of antique summer "cottages" that have been in families for generations, several of which were designed by noted architect John Calvin Stevens. These cottages are unique in that many have not changed for well over one hundred years, presenting an interesting view of a bygone era.

Although there were once many hotels on Prouts Neck, including the Jocelyn, and most notably the Checkley, the only one that remains is the venerable Black Point Inn, which is open on a seasonal basis.

Famous families that have summered in Prouts Neck for generations include members of the Rockefeller family and descendants of Thomas M. Carnegie.

The Prouts Neck Bathing Association (PNBA) is responsible for maintenance and regulation of the private Beach Club.

The Prouts Neck Yacht Club (PNYC) is located on the southwestern corner of the peninsula, also known as Western Point. The club conducts sailing classes for children from age 6-17 as well as classes for adults. The club operates moorings for both powerboats and sailboats. The club owns a fleet of 420s, a fleet of Prams, a few Optimists and a fleet of about 8 Sonars. Prouts Neck Yacht Club has adult Sonar races weekly as well as 2 inter-club regattas each summer, (one in August, one in July), both called the Golden Cleat Regatta.

All content from Kiddle encyclopedia articles (including the article images and facts) can be freely used under Attribution-ShareAlike license, unless stated otherwise. Cite this article:
Prouts Neck Facts for Kids. Kiddle Encyclopedia.