Gorham is a town in Cumberland County, Maine, United States. The population was 16,381 at the 2010 census. The 2012 estimate of Gorham's population was 16,667. In addition to its urban village center known as Gorham Village or simply "the Village," the town encompasses a number of smaller, unincorporated villages and hamlets with distinct historical identities, including South Gorham, West Gorham, Little Falls, White Rock, and North Gorham. Gorham is home to one of the three campuses of the University of Southern Maine. In 2013, Gorham was voted second best town in Maine after Hampden by a financial website.

First called Narragansett Number 7 was one of seven townships granted by the Massachusetts General Court to soldiers (or their heirs) who had fought in the Narragansett War of 1675, also called King Philip's War. The land was first settled in 1736 by Captain John Phinney and his family, followed in 1738 by Hugh McLellan and Daniel Mosher. By 1743, the first sawmill was established by John Gorham at Little River. Without window-glass, the first dwellings were constructed of logs chinked with moss and clay.

Narragansett Number 7 suffered its first Indian raid in 1745 during King George's War, when the meeting house and Gorham's sawmill were burned. It was attacked again in 1746, when five colonists were killed and three abducted. Incursions during the French and Indian Wars would finally end, however, with the 1763 Treaty of Paris. The town was incorporated as Gorham in 1764. It would annex land from Standish in 1831 and 1839, and from Scarborough in 1864.

Good soil benefited agriculture, and numerous falls provided water power for industry. The town developed into a manufacturing center, with Portland a nearby market. Products included textiles, clothing, carpet, lumber, barrels, chairs, carriages, wagons and sleighs. There was also a box factory, corn-canning factory, paper pulp mill, brickyard, tannery, and granite and marble works. The Cumberland and Oxford Canal opened in 1829 connecting Casco Bay with Sebago Lake, although it would be discontinued in 1871, having been rendered obsolete by John A. Poor's York and Cumberland Railroad (later the Boston and Maine Railroad), which entered Gorham in 1851. The railroad was dismantled in 1961, but the former grade serves as a multi-use recreational trail. On September 12, 1870, the first train of the Portland and Ogdensburg Railroad (later part of the Maine Central Railroad Mountain Division) traveled from Portland to Sebago Lake through White Rock. White Rock station closed in 1921.

In 1803, Gorham Academy was founded. Designed by Samuel Elder, the Federal style Gorham Academy Building was erected in 1806. The institution would evolve into Western Maine Normal School, and later Gorham State Teachers College. Today, it is the University of Southern Maine at Gorham.

Gorham currently has a much smaller industrial infrastructure than it did in the earlier years. The majority of Gorham's industry is based along the border with Westbrook, and many of the mills that formerly existed along the Presumpscot River are now under water, flooded with the construction of the Dundee Dam. In recent decades Gorham has increased in popularity as a bedroom community of Portland. Its residents and town officials have been confronted with various issues related to managing suburban growth in a historically rural town.

Flaggy Meadow Road: a road from Route 25 in Gorham to the Buxton county line. 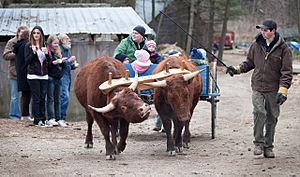 There were 5,719 households of which 36.0% had children under the age of 18 living with them, 57.1% were married couples living together, 9.9% had a female householder with no husband present, 4.0% had a male householder with no wife present, and 28.9% were non-families. 21.8% of all households were made up of individuals and 9% had someone living alone who was 65 years of age or older. The average household size was 2.59 and the average family size was 3.03.

There were 4,875 households out of which 38.7% had children under the age of 18 living with them, 59.2% were married couples living together, 10.0% had a female householder with no husband present, and 27.6% were non-families. 20.5% of all households were made up of individuals and 8.3% had someone living alone who was 65 years of age or older. The average household size was 2.67 and the average family size was 3.11. 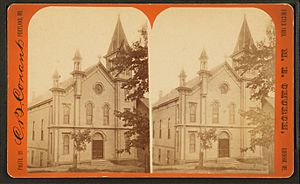 All content from Kiddle encyclopedia articles (including the article images and facts) can be freely used under Attribution-ShareAlike license, unless stated otherwise. Cite this article:
Gorham, Maine Facts for Kids. Kiddle Encyclopedia.