Buxton is a town in York County, Maine, United States. It is part of the Portland–South Portland–Biddeford, Maine Metropolitan Statistical Area. The population was 8,034 at the 2010 census. Buxton includes the villages of Salmon Falls/Tory Hill, Chicopee, Groveville, Bar Mills, West Buxton, and Buxton Center. The old town Common is east of Union Falls, which is the location of Skelton Dam, Operated by Central Maine Power, and near historic location of the original settlement at Pleasant Point.

The township was granted by the Massachusetts General Court as Narragansett Number 1 in 1728. It was assigned to Philemon Dane of Ipswich, Massachusetts and 119 other veterans (or their heirs) who had fought in King Philip's War against the Narragansett Indians in 1675. Settlement was attempted in the early 1740s but abandoned because of the ongoing French and Indian Wars.

The first permanent settlement commenced in fall of 1750 near Salmon Falls, which was within protection of the stockaded blockhouse and trading post built in 1728 a half mile below Union Falls in present-day Dayton. Amos Chase was one of the pioneers of the town, and his daughter was said to be the first white child born in Buxton. He was a prominent figure in the area, one of the largest taxpayers, and was the first deacon of the Congregational Church in Pepperellborough (present-day Saco, ME). The first schoolhouse in Buxton was established in 1761 by Rev. Silas Moody. Narragansett Number 1 was incorporated in 1772 as Buxton. It was named by its minister, Rev. Paul Coffin for the spa town of Buxton in Derbyshire, England, for unknown reasons. Buxton, England is often incorrectly cited as the home of his ancestors, but that was Brixton as noted on page 7 of the cited source(2).

Settlers found the land generally level and suited for farming. Chief crops were corn, potatoes and hay. Buxton also provided excellent water power sites. The first sawmill was on the Little River, a tributary of the Presumpscot River. A gristmill called Bog Mill was built at the outlet of Bonny Eagle Pond. The biggest mills, however, were located at the series of falls on the Saco River. Salmon Falls had sawmills capable of turning out four million feet of lumber annually. Bar Mills had gristmills and a box mill. Moderation Falls in West Buxton had sawmills, heading mills and woolen textile mills which produced about 936,000 yards of cloth annually. Buxton's mill town prosperity left behind fine architecture. Listed on the National Register of Historic Places are Elden's Store, the Buxton Powder House, the First Congregational Church, Royal Brewster House and Salmon Falls (East) Historic District. 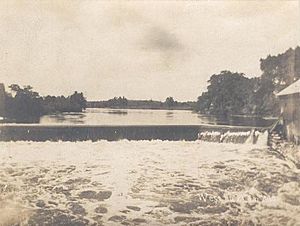 There were 3,108 households of which 32.8% had children under the age of 18 living with them, 58.5% were married couples living together, 9.4% had a female householder with no husband present, 4.6% had a male householder with no wife present, and 27.5% were non-families. Of all households, 19.1% were made up of individuals and 6.5% had someone living alone who was 65 years of age or older. The average household size was 2.58 and the average family size was 2.94.

There were 2,804 households out of which 35.3% had children under the age of 18 living with them, 62.6% were married couples living together, 8.7% had a female householder with no husband present, and 25.3% were non-families. Of all households, 18.0% were made up of individuals and 5.8% had someone living alone who was 65 years of age or older. The average household size was 2.65 and the average family size was 3.00. 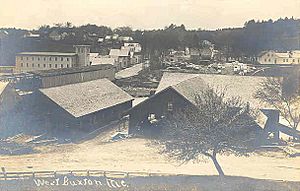 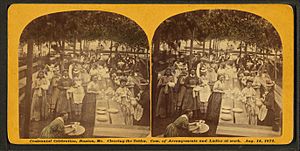 All content from Kiddle encyclopedia articles (including the article images and facts) can be freely used under Attribution-ShareAlike license, unless stated otherwise. Cite this article:
Buxton, Maine Facts for Kids. Kiddle Encyclopedia.