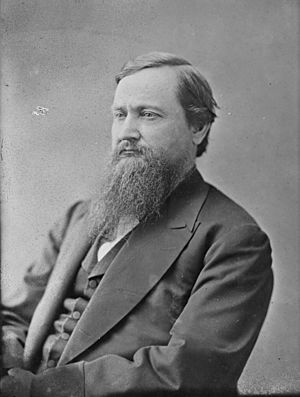 Born in Buxton, York County, Maine, he completed preparatory studies, and was graduated from Waterville College (now Colby College), Waterville, Maine, in 1849. For five years he was principal of the Norway and Hebron Academies. He became a member of the Maine House of Representatives in 1854 and served in the Maine Senate in 1855. He served as state superintendent of common schools in 1855 and 1857 – 1859. He was a delegate to the Republican National Convention in 1856. He studied law, was admitted to the bar in 1856 and commenced practice in Portland, Maine, in 1860. He entered the Union Army as colonel of the 5th Maine Volunteer Infantry Regiment, May 6, 1861, but mustered out on August 31, 1861. He served as United States consul at Vera Cruz, Mexico, in 1861 and 1862. 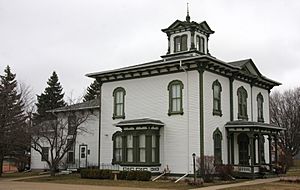 Home Dunnell built and lived in, now part of a museum in Owatonna, Minnesota.

Dunnell moved to Minnesota in 1865, settling first in Winona, in 1865, and moving to Owatonna in 1867. He became a member of the Minnesota House of Representatives in 1867 and served as state superintendent of public instruction from April 2, 1867, to August 1870, when he resigned.

He was one of the founders and a member of the board of trustees of Minnesota Academy, a high school for boys and girls in Owatonna, being renamed Pillsbury Academy in 1887, and becoming a military academy for high school boys only in 1920.

Dunnell died in Owatonna in 1904 and is buried in Forest Hill Cemetery. He is the namesake of the city of Dunnell, Minnesota.

All content from Kiddle encyclopedia articles (including the article images and facts) can be freely used under Attribution-ShareAlike license, unless stated otherwise. Cite this article:
Mark H. Dunnell Facts for Kids. Kiddle Encyclopedia.