First settled in 1621, the town developed as a trading and, later, shipbuilding and shipping center with light manufacturing. It was part of the town of Wells until 1820, when it incorporated as a separate town. "Kennebunk, the only village in the world so named," was featured on a large locally famous sign attached to the Kesslen Shoe Mill on Route One. To the Abenaki Indians, Kennebunk meant "the long cut bank," presumably the long bank behind Kennebunk Beach. Kennebunk's coastline is divided into three major sections. Mother's Beach, Middle Beach or Rocky Beach, and Gooches Beach or Long Beach. Separate from Kennebunk Beach is secluded Parson's Beach, a quiet alternative to the summer crowds. Note there is some local controversy regarding the "Mother's Beach" moniker, (nickname). According to many local residents, the smaller of the three main beaches - at the intersection of Beach Ave and Ridge Ave - is officially Kennebunk Beach or, alternatively, Boothby Beach. The term Boothby beach was from the mid-1730s when a Mabel Littlefield married Richard Boothby and settled on land near what came to be known as Boothby Beach.The information about the Boothbys was taken from "Old News From Southern Maine" article on Mable and Richard Boothby, by Sharon Cummins. Many natives today may not remember it being called Boothby Beach and over the years the beach came to be known as Kennebunk Beach or Mothers Beach. Older residents also recall the name Dipsy Bath Beach, a reference to the baths once located there. The term Mother's Beach didn't come into widespread use until the mid '80s; Although other native residents will dispute that date and say they remember it being called "Mothers Beach" as far back as the late 1950s. The name likely evolved due to its small size and generally calmer water, due to the rocks under and above the ocean, thus making it a natural made harbor of refuge that is safer for swimming and which makes it popular with mothers keeping a watchful eye on their progeny, (children). The name is clearly descriptive rather than official, in spite of the recent installation of road signs pointing the way to "Mother's Beach". Contradicting the above beach naming is the Town's website listing "Permits are valid for Gooch’s Beach, Kennebunk Beach (Middle Beach) and Mother’s Beach." Additionally without public parking access both Libbys and Crescent beaches are in Kennebunk between Parson's beach and Mother's beach.

The town is a popular summer tourist destination. Kennebunk contains fine examples of early architecture, the most noted of which is the Wedding Cake House, a Federal-style dwelling extensively decorated with scroll saw Gothic trim. This was added to the house for his wife of many years by George Washington Bourne late in his life, and not as legend has it by a ship captain for a young bride lost at sea. Local economy is tourism based. The headquarters for the natural health-care product manufacturer Tom's of Maine is located in Kennebunk. The town's archives are located at the local history and art center, the Brick Store Museum, on Main Street. Many residents commute to Portland, New Hampshire, and Massachusetts.

The Lafayette Elm was a tree which was planted to commemorate General Lafayette's 1825 visit to Kennebunk. It became famous for its age, size, and survival of the Dutch elm disease that destroyed the hundreds of the other elms that once lined Kennebunk's streets. The elm is featured on the town seal. The restored Kesslen Shoe Mill has been renamed the Lafayette Center. Kennebunk is home to two of the state's oldest banks—Ocean Bank (1854) and Kennebunk Savings Bank (1871). Only Saco & Biddeford Savings Institution (1827) and Bangor Savings Bank (1852) are older. Summer Street was Maine's first Historic District that was listed on the National Register of Historic Places. 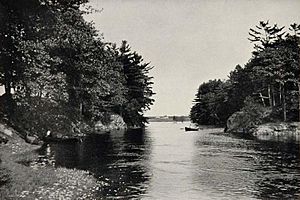 Amtrak also goes through Kennebunk, but does not have a station stop. There will be a Downeaster stop in the summer of 2018. The closest Amtrak station to Kennebunk is in Wells, towards Boston, and Saco, towards Portland. 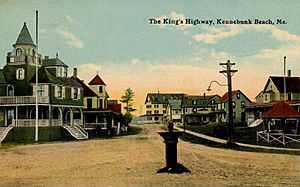 There were 4,689 households, of which 26.9% had children under the age of 18 living with them, 52.1% were married couples living together, 8.5% had a female householder with no husband present, 2.7% had a male householder with no wife present, and 36.7% were non-families. 31.1% of all households were made up of individuals, and 16.5% had someone living alone who was 65 years of age or older. The average household size was 2.27 and the average family size was 2.85.

Kennebunk, along with neighboring Kennebunkport and Arundel, form Regional School District 21. The schools in RSU 21 are Consolidated School, Kennebunk Elementary School, Mildred L. Day School, Sea Road School, Middle School of the Kennebunks, and Kennebunk High School. The Middle School of the Kennebunks is part of Maine's project that gives laptops to all of the 6th, 7th and 8th graders in the school called MLTI, or Maine Learning Technology Initiative.

In 2000, a group of students teamed up with parents and local community members to found The New School, a small alternative high school, with students coming from as close as Kennebunk and Wells and as far away as Portland and Somersworth. The school is accredited by the State of Maine and the first group of students graduated in June 2001. The New School has a focus on community-based learning. 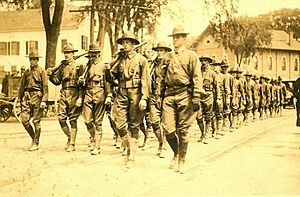 All content from Kiddle encyclopedia articles (including the article images and facts) can be freely used under Attribution-ShareAlike license, unless stated otherwise. Cite this article:
Kennebunk, Maine Facts for Kids. Kiddle Encyclopedia.