Goodall Park is a baseball venue in Sanford, Maine, United States, which is home to the Sanford Mainers of the New England Collegiate Baseball League. The park opened in 1915. It has a seating capacity of 950 spectators. 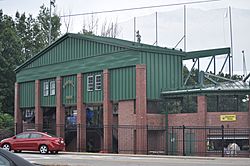 The rear of the park's rebuilt grandstand.

The park opened on May 29, 1915. Its first game was between the Sanford Professionals and the Lewiston Pilgrims (of Lewiston, Maine). The game was played in front of 1,300 fans.

In 1919, the park hosted an exhibition game between the Sanford Professionals and the Boston Red Sox. The game was Babe Ruth's last game in a Red Sox uniform. Ruth hit a three-run home run to lead the Red Sox to a come-from-behind 4-3 victory. Ruth did not play in another game for the Red Sox before being traded to the New York Yankees by Red Sox owner Harry Frazee.

Most of the park's 950-spectator capacity comes from the grandstand located directly behind home plate. The grandstand consists entirely of chairbacked seats. The park also has a section of metal bleacher seating located down the first base line.

All content from Kiddle encyclopedia articles (including the article images and facts) can be freely used under Attribution-ShareAlike license, unless stated otherwise. Cite this article:
Goodall Park Facts for Kids. Kiddle Encyclopedia.