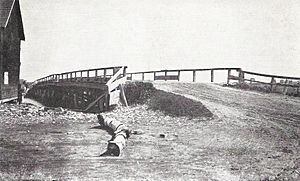 Bridge over the Webhannet River in 1920

The river has five tributaries, including three with official names: Pope’s Creek, Depot Brook, and Blacksmith Brook. Draining a sandy outwash plain left by the last glacier, they run parallel to the southern Maine coastline behind the heavily developed barrier beaches of Wells and Drakes Island. The river flows into Wells Harbor, then empties between a pair of jetties into the Gulf of Maine.

All content from Kiddle encyclopedia articles (including the article images and facts) can be freely used under Attribution-ShareAlike license, unless stated otherwise. Cite this article:
Webhannet River Facts for Kids. Kiddle Encyclopedia.