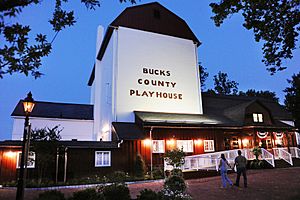 The Bucks County Playhouse is located in New Hope, Pennsylvania.

When the Hope Mills burned in 1790, the grist mills were rebuilt as the New Hope Mills by Benjamin Parry. The town was renamed for the mills. 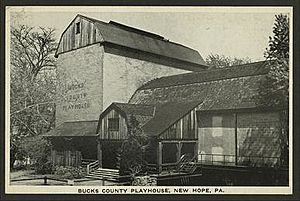 The building was saved from demolition in the 1930s and purchased and run by a group including playwrights Moss Hart and Kenyon Nicholson. Renovations converting the building into a theatre began in 1938. The first show opened there on 1 July 1939, Springtime for Henry featuring Edward Everett Horton.

The Bucks County Playhouse became a summer theater. It was the starting point for many actors and became a place where plays slated for Broadway were tried out. Neil Simon's Barefoot in the Park had its premiere at the theater in 1963, starring Robert Redford and Elizabeth Ashley. Other notable actors who performed at the theater over the years include Bela Lugosi, Dick Van Dyke, Tyne Daly, Grace Kelly, Angela Lansbury, and Walter Matthau. 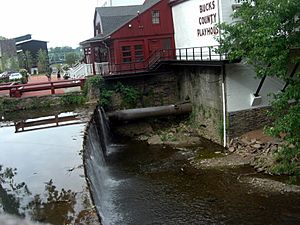 All content from Kiddle encyclopedia articles (including the article images and facts) can be freely used under Attribution-ShareAlike license, unless stated otherwise. Cite this article:
Bucks County Playhouse Facts for Kids. Kiddle Encyclopedia.