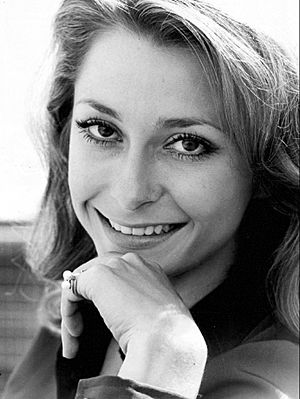 Elizabeth Cole (better known as Elizabeth Ashley; August 30 1939) is an American stage, television series and movie actress. She received the Tony Award for "Best Featured Actress in a Play". She has performed in many Broadway plays and movies. She was in the television sitcom Evening Shade in the 1990s. She is originally from Ocala, Florida.

All content from Kiddle encyclopedia articles (including the article images and facts) can be freely used under Attribution-ShareAlike license, unless stated otherwise. Cite this article:
Elizabeth Ashley Facts for Kids. Kiddle Encyclopedia.