Bensalem Township is a township in Bucks County, Pennsylvania, United States and borders the northeast section of Philadelphia. The township is composed of many communities, including Andalusia, Bensalem, Bridgewater, Cornwells Heights, Eddington, Flushing, Oakford, Siles, Trappe, and Trevose. Bensalem Township has no incorporated municipalities (city or borough) within its boundaries. As of the 2010 census, the township had a total population of 60,427, which makes it the most populated municipality in Bucks County, and the ninth most populated municipality in Pennsylvania. The township, which was founded in 1692, is almost as old as Pennsylvania itself, which was founded in 1682.

The origins of Bensalem likely comes from references made by settler Joseph Growden, who named his estate as Manor of Bensalem' in honor of William Penn, the son of peace and the Semitic term for peace Salem. Originally named Salem, the word Ben was added in 1701.

Bensalem is the southernmost township in Bucks County and is bordered by Philadelphia to the west and south, Croydon and the rest of Bristol Township to the east and northeast, Hulmeville and Middletown Township to the north, and Feasterville, Trevose, and Oakford in Lower Southampton Township to the northwest. Across the Delaware River in Burlington County, New Jersey to the southeast, there are Beverly, Delanco Township, and Edgewater Park Township.

Bensalem has a significant Jewish community, with the following institutions. 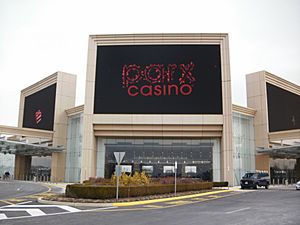 Bensalem is home to Parx Casino and Racetrack, a 1-mile (1.6 km) thoroughbred horse racing track. This facility opened in November 1974 as Keystone Racetrack. The name was changed to Philadelphia Park in 1984. The track became notable as the original home of 2004 Kentucky Derby and Preakness Stakes champion Smarty Jones, who placed second in the Belmont Stakes, narrowly missing the Triple Crown. In 2006, a slots parlor casino opened at Philadelphia Park and the facility was renamed to Philadelphia Park Racetrack and Casino. A permanent standalone casino structure opened in December 2009 and was renamed PARX Casino. The facility boasts 250,000 square feet (23,000 m2) including gaming, entertainment and banquet space.

The Mission Center and National Shrine of St. Katharine Drexel is located on Bristol Pike in Bensalem. The shrine houses the remains of Katharine Drexel, born in 1858 to a wealthy Philadelphia family. As a young woman Saint Katharine turned her back on a life of privilege to serve the poor, focusing on Native- and African Americans. She founded the Sisters of the Blessed Sacrament in 1891. The next year she and thirteen other sisters moved into St. Elizabeth Convent in Bensalem. St. Katharine died in 1955 and was canonized in 2000. The shrine welcomes visitors daily.

TD Bank Amphitheater is located in Bensalem, and is a popular venue for concerts.

Bensalem is also home to the Mongkoltepmunee Buddhist Temple, or Wat Mongkoltepmunee, on Knights Road. This shrine is an exact replica of a temple in Bangkok and is the only one of its kind in the United States. It serves as a place of high ceremonies and meditation for a community of Buddhist monks who came to Bensalem from Thailand in the 1980s.

For the 2002 M. Night Shyamalan movie Signs, starring Mel Gibson, a stage set was built inside a warehouse on State Road for many of the interior shots. 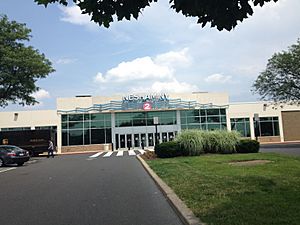 The Neshaminy Mall is located within Bensalem. It was one of the first malls to be constructed in the country in 1968. It has four main anchors (three department stores and one movie theatre) and over 120 smaller shops and eateries. The AMC Neshaminy 24 Theater is the largest and highest sales-producing theater in Pennsylvania. In addition, it has on many occasions been a top 10 for theater engagements in the United States (including the opening of Signs where it was #1). [2]

Benjamin Franklin would often travel to Bensalem to visit his friend, Joseph Galloway, at Growden Mansion. At the time, the Galloway family owned all of present-day Bensalem Township. A local legend maintains that Franklin performed his famous kite-flying experiment in Bensalem, at the mansion, to prove that lightning was the same as static electricity. (The broader consensus is that Benjamin Franklin flew his kite closer to his home in Philadelphia.)

Bensalem is home to the Philadelphia Gun Club which hosts one of the few trap pigeon shoots in the United States. Live birds are released from boxes called traps and then shot by club members. Many birds are not killed outright and are collected to be killed by hand.

Andalusia and Belmont are listed on the National Register of Historic Places. Andalusia is also designated a National Historic Landmark.

The U.S. subsidiary of Hoshino, who manufactures Tama Drums and Ibanez guitars is located here 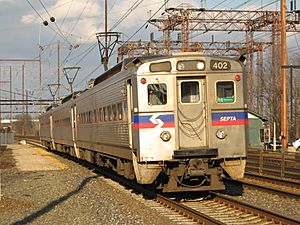 Two SEPTA Regional Rail lines serve Bensalem Township. The West Trenton Line stops at the Trevose and Neshaminy Falls stations in the northern part of the township. The Trenton Line stops at the Cornwells Heights and Eddington stations in the southern part of the township. The Cornwells Heights station is also served by Amtrak's Keystone Service and Northeast Regional services along the Northeast Corridor and has a park-and-ride with access from Interstate 95. CSX Transportation's Trenton Subdivision freight railroad line runs through the northern portion of the township. Multiple SEPTA bus routes pass through the township, serving points of interest within the township and providing connections to Philadelphia and other suburbs.

Former Fortune 1000 company Charming Shoppes had its headquarters in Bensalem, and was ranked #927 on the 2012 list.

The US Headquarters for Ibanez Guitars and Tama Drums is located in Bensalem Township.

Suez Water Technologies & Solutions is a water treatment company based in the Trevose section of Bensalem Township.

Public schools in Bensalem are operated by the Bensalem Township School District. The school district consists of six elementary schools, two middle schools, and Bensalem High School. The township has its own nine-member school board. Holy Ghost Preparatory School is a private Catholic high school located in the township.

Founded in 1969, Roman Catholic Saint Ephrem School serving Grades Pre-K to 8 has students from Bensalem and the surrounding area.

The Roman Catholic Archdiocese of Philadelphia announced in 2011 that Our Lady of Fatima School was closing as the number of students had declined.

Two SEPTA Regional Rail lines serve Bensalem Township, providing service to Center City Philadelphia. The West Trenton Line stops at the Trevose and Neshaminy Falls stations in the northern part of the township. The Trenton Line stops at the Cornwells Heights and Eddington stations in the southern part of the township. The Cornwells Heights station is also served by Amtrak's Keystone Service and Northeast Regional services along the Northeast Corridor and has a park-and-ride with access from Interstate 95 and Pennsylvania Route 63. CSX Transportation's Trenton Subdivision freight railroad line runs through the northern portion of the township. Multiple SEPTA bus routes pass through the township, serving points of interest within the township and providing connections to Philadelphia and other suburbs. Bus routes serving Bensalem Township include SEPTA City Bus Routes 1, 14, 20, 50, 58, and 78 and SEPTA Suburban Bus Routes 128, 129, 130, 133, and 150. SEPTA also operates the Boulevard Direct, a limited-stop bus route between the Neshaminy Mall in Bensalem Township and the Frankford Transportation Center in Northeast Philadelphia that follows Roosevelt Boulevard through Northeast Philadelphia. The Delaware River passes along the southeastern border of Bensalem Township and provides access for shipping. The Northeast Philadelphia Airport, located a couple miles away, provides general aviation services. The Philadelphia International Airport is 25 miles (40 km) away, offering flights to domestic and international destinations.

All content from Kiddle encyclopedia articles (including the article images and facts) can be freely used under Attribution-ShareAlike license, unless stated otherwise. Cite this article:
Bensalem Township, Pennsylvania Facts for Kids. Kiddle Encyclopedia.