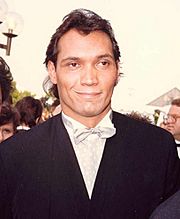 Jimmy Smits (born July 9, 1955) is an American movie, television, stage, and voice actor who is known for his role as Victor Sifuentes in L.A. Law. He won an Golden Globe Award, an Emmy Award, an Saturn Award, and an Screen Actors Guild Award.

Smits was born on July 9, 1955 in Brooklyn, New York City, New York. He studied at Brooklyn College and at Cornell University. Smits was married to Barbara Smits from 1981 until they divorced in 1987. He was partners with Wanda De Jesus since 1986. With Barbara, he has two children.

All content from Kiddle encyclopedia articles (including the article images and facts) can be freely used under Attribution-ShareAlike license, unless stated otherwise. Cite this article:
Jimmy Smits Facts for Kids. Kiddle Encyclopedia.