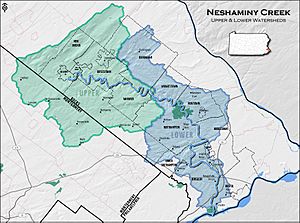 Map of the Neshaminy Creek 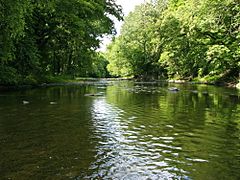 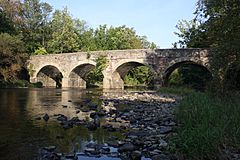 Neshaminy Creek is a 40.7-mile-long (65.5 km) stream that runs entirely through Bucks County, Pennsylvania, rising south of the borough of Chalfont, where its north and west branches join. Neshaminy Creek flows southeast toward Bristol Township and Bensalem Township to its confluence with the Delaware River. The name "Neshaminy" originates with the Lenni Lenape and is thought to mean "place where we drink twice". This phenomenon refers to a section of the creek known as the Neshaminy Palisades, where the course of the water slows and changes direction at almost a right angle, nearly forcing the water back upon itself. These palisades are located in Dark Hollow Park, operated by the county, and are flanked by Warwick Township to the south and Buckingham Township to the north.

The watershed of the Neshaminy Creek covers an area of approximately 236 square miles (610 km2), 86 percent of which is located in Bucks County and 14 percent in Montgomery County. It is part of the greater Delaware River watershed. The creek's course runs mostly through suburban areas to the north of Philadelphia. However, the course of the creek does run through a few sections of rural and semi-rural terrain, and some forested areas remain. Neshaminy Creek passes through two state parks, Tyler State Park and Neshaminy State Park. Neshaminy Creek has the distinction of having three tributaries named Mill Creek.

The name seems to derive from the Lenape 'Nesha-men-ning', loosely meaning 'the place where we drink twice' or 'two drinking places'. Older names were written as Nishambanach (1671), Nichmink, Nishammis (1679), Nishmines (1680), Neshimineh (1682), Neshamineh (1686), Neshaminia (1688), Neshamenah (1702), and others. This may refer to two springs near a village of the Lenape, since native people drink from a spring whenever available rather than from a stream. The location of the springs is unknown, but may have been two springs extant many years ago, not far from the confluence of the north and west branches. One was known at the time as the 'Great Spring' and the other much smaller about 300 feet (91 m) away and was said to have been near an old Indian trail. The Neshaminy was the first stream in Bucks County to have been crossed by ferries and bridges. The Gordon Gazetteer of 1832 called it the Neshaminy River and stated that "over it, there are many fine wooden and stone bridges. The bridge nearest its mouth on the road to New York is a draw bridge-in private property, erected by the Messrs. Bassonet and Johnson, whose heirs and assigns levy tolls by virtue of the Act of Assembly 6th Sept. 1785. The Neshaminy as far as Barnsleys Ford was declared a public highway by Act of 9th March, 1771." The stream has seen a number of major floods. In the Mina flood of 1833, most of the bridges were washed away and was the highest flood known at that time. Compared to the flood of 16–17 July 1865, the 1833 flood was exceeded by 6 feet (1.8 m), rupturing the Turk Dam and destroying almost all of the bridges downstream. As the waters reached the Delaware River, the flow was so great as to reach the New Jersey shoreline leaving a large pile of debris and preventing shipping from traversing the river. The Neshaminy has been the subject of many artists over the years.

Beginning at the junction of the West Branch and North Branch Neshaminy Creeks, Neshaminy Creek begins in the Brunswick Formation, formed during the Jurassic and Triassic, which consists of mainly mudstone, shale, and siltstone. Mineralogy includes argillite and hornfels. West of Chalfont it passes into an extension of the Lockatong Formation for a short distance, back into the Brunswick, then again to the Lockatong. The Lockatong Formation was deposited during the Triassic and consists of argillite, shale, and occasionally, a layer of limestone.

East of Chalfont, the Neshaminy flows into the Stockton Formation, laid during the Triassic, consisting of arkosic sandstone, sandstone, shale, siltstone, and mudstone. It flows generally along the Stockton and Lockatong transition until the Neshaminy palisades, where it turns west, then in a few miles turns south into a region of felsic gneiss, which contains quartz, microcline, pyroxene, and biotite.

After passing Oakford, it passes through a small deposit of mafic gneiss, from the Precambrian, which contains calcic plagioclase, hypersthene or augite, quartz, and hornblende.

Next, the stream passes into the Wissahickon Formation (lower Paleozoic), a schist which has metamorphosed into a facies, containing garnet, staurolite, kyanite, and sillimanite. The Wissahickon also contains oligoclase-mica schist, hornblende and augen gneiss', and some feldspar.

It, then, passes through a region of Pensauken and Bridgeton Formations, from the Tertiary, but it has eroded through it to the underlying Wissahickon Formation. Both formations consist of quartz sand.

Finally, the Neshaminy passes through the Trenton gravel formation, from the Quaternary, which is sand and clay-silt where it meets the Delaware River.

Like other rivers and streams, the Neshaminy Creek poses a flooding threat to neighboring areas in times of rapid downpours. The waters of the creek have been known to rise more than 10 feet (3 m) above their normal level during severe storms, such as Hurricane Floyd, which hit the area on September 16, 1999. In 2005, the Natural Resources Conservation Service earmarked $3 million for flood mitigation programs along the Neshaminy Creek. The creek was the site of significant flooding again from June 25 through July 5, 2006 during the Mid-Atlantic United States flood of 2006. In late August through early September 2011, Hurricane Irene, and Tropical Storm Lee (2011) rose the Neshaminy Creek to levels which had not seen before in 100 years. Repairs cost around $1 million total.

All content from Kiddle encyclopedia articles (including the article images and facts) can be freely used under Attribution-ShareAlike license, unless stated otherwise. Cite this article:
Neshaminy Creek Facts for Kids. Kiddle Encyclopedia.