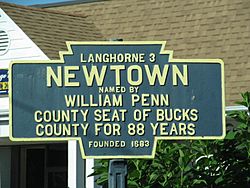 Newtown is a borough in Bucks County, Pennsylvania, United States. The population was 2,248 at the 2010 census. It is located just west of the Trenton, New Jersey metropolitan area, and is part of the larger Philadelphia metropolitan area. It is entirely surrounded by Newtown Township, from which it separated in 1838. State Street is the main commercial thoroughfare with wide sidewalks, shops, taverns, and restaurants. In September 2011, Yahoo! Travel ranked Newtown Borough seventh in their annual 10 Coolest Small Towns in America list, despite incorrectly claiming that Newtown is part of "Amish Country". There is a thriving Amish Market in Newtown Township, and perhaps this could explain the confusion. While there are very small pockets of Amish communities in Bucks County, this is much more characteristic of Central Pennsylvania, a considerably more rural area than suburban Lower Bucks.

Newtown was founded by William Penn in 1684. Newtown was one of several towns that Penn had organized around Philadelphia to provide country homes for city residents and to support farming communities. It was the county seat of Bucks County from 1726 until 1813, when it was replaced by a more central Doylestown. After his December 26, 1776 morning march to Trenton, and before the Battle of Princeton, General George Washington made his headquarters in Newtown. Newtown was incorporated on April 16, 1838 and has been enlarged three times since. In 1969 Newtown's entire central business district was placed on the National Register of Historic Places. This designation was largely due to Newtown's historic clock tower. Newtown is enhanced by unique boutiques, colleges, cuisine, a climate for industry, Pennsylvania’s most popular state park (Tyler State Park) and a Heritage Walk that traces the very steps of George Washington. The Law School Admission Council is headquartered in Newtown Township. As a result, many American lawyers have heard of Newtown. The oldest operating movie theater in America is Newtown Theatre at 120 North State Street.

Newtown is known for its wealth of history. One of the most noted former residents of Newtown was painter Edward Hicks (1780–1849). He lived in Newtown for over forty years with his family, where he was able to own his own business. Newtown has an established historical society called the Newtown Historic Association.

The Newtown Hardware House has been in continuous operation for over 130 years, which ranks as the longest tenure for any single business in Newtown.

According to the United States Census Bureau, the borough has a total area of 0.6 square miles (1.4 km²), all of it land.

The Newtown Creek, a tributary of the Neshaminy Creek, runs North to South and is the western boundary between the borough and the township of Newtown.

State Street runs through Newtown's main commercial area and intersects with Washington Avenue at the borough's infrastructural center. Pennsylvania routes 532, 332, and 413 converge in and around Newtown. The Newtown Bypass runs to the west and south of the borough and connects to Interstate 95 to the east. On April 22, 2014, by act of the Pennsylvania General Assembly, it was renamed Brian S. Gregg Memorial Highway. Officer Gregg – a Newtown Borough police officer – lost his life in the line of duty on September 29, 2005.

Until January 14, 1983, Newtown was served by SEPTA's Fox Chase/Newtown Line commuter rail service. At that time, service was suspended because of failing train equipment. Since then, there has been constant talk of reinstating service because of recent strong population growth in the surrounding area; however, this has not materialized. There was also a movement under way to convert the unused rail corridor into a bike trail that has thus far been unsuccessful because of resistance in surrounding communities.

To date, SEPTA has no plans to restore train service. The entire issue of resuming commuter service has been a political albatross almost from the day the trains stopped. Newtown remains the victim in all the political squabbling that has amassed over the years, as they have always given strong support of returned commuter service and have the most to gain. Author Joseph Schwieterman commented in 2001 that "few communities experiencing the loss of service have engaged in as protracted a dialogue about bringing back their passenger trains as Newtown. The continuing impasse has left many transit advocates skeptical that the borough will ever be accessible by rail again."

However, in September 2009, the Southampton-based Pennsylvania Transit Expansion Coalition (PA-TEC) began discussions with all townships along the rail line, as well as SEPTA officials, about possible resumption of passenger service. Bucks County officials and Newtown residents overwhelmingly supported PA-TEC's efforts, making it official in December 2009 when the Newtown Board of Supervisors passed a resolution supporting the full restoration of passenger service; neighboring Montgomery County officials are also supportive of re-thinking the rail corridor as well.

Newtown Township, which surrounds the borough, has a system of bike and walking trails that lead to the borough in several places, including from Tyler State Park.

There were 920 households, out of which 28.3% had children under the age of 18 living with them, 54.9% were married couples living together, 7.8% had a female householder with no husband present, and 35.3% were non-families. 29.9% of all households were made up of individuals, and 7.9% had someone living alone who was 65 years of age or older. The average household size was 2.35 and the average family size was 2.95.

All content from Kiddle encyclopedia articles (including the article images and facts) can be freely used under Attribution-ShareAlike license, unless stated otherwise. Cite this article:
Newtown, Bucks County, Pennsylvania Facts for Kids. Kiddle Encyclopedia.