Mount Holly is a township in Burlington County, New Jersey, United States. It is the county seat of Burlington County as well as an eastern suburb of Philadelphia. As of the 2010 United States Census, the township's population was 9,536, reflecting a decline of 1,192 (-11.1%) from the 10,728 counted in the 2000 Census, which had in turn increased by 89 (+0.8%) from the 10,639 counted in the 1990 Census. Mount Holly also gives its name to the National Weather Service's Weather Forecast Office for the Philadelphia metropolitan area, though the office is actually located in adjacent Westampton.

The first European settlement in what is now Mount Holly began in 1677, when Walter Reeves acquired land from the Lenape (Delaware) Native Americans living in the area. He constructed a dam on Rancocas Creek to channel water through a raceway to power a grist mill and saw mill. Edward Gaskill and his sons hand dug the mill race on their property between 1720 and 1723. After the mills were established, more settlers were attracted to the area and built houses and commercial buildings on High, Church, White, Mill, and Pine streets, including the Shinn Curtis Log House (1712). By 1800, over 250 dwellings had been built.

Today no mills remain on the raceway, which still flows in its original course from the Rancocas just above the dam. The raceway proved a way for herring to make their way above the dam and was the scene of an annual fish run in the spring which provided fresh herring for slating and eating. The former mill land has been preserved as the Mill Dam Park. It marks the importance of mills to the early settlements.

On December 17, 1776, Colonel Samuel Griffin of the Continental Army crossed the Delaware River with 600 men — mostly untrained men and boys, and with little equipment — and marched to Mount Holly, where he set up a few "3-pounder" artillery pieces on Iron Works Hill. Hessian commanders von Block and Carl von Donop, were told that there were 3,000 American troops at Mount Holly.

After George Washington crossed the Delaware River on December 25, 1776, the fact that thousands of Hessian troops had been drawn to Mount Holly aided in the Continental Army's success in the Battle of Trenton the next day, a surprising American victory that helped turn the Army's fading morale after the disastrous defeat at the Battle of Fort Washington just weeks before and the ignominious retreat through New Jersey. 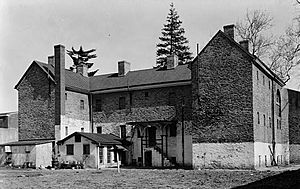 The 1793 state legislature approved the relocation of the Burlington County seat from Burlington City to Mount Holly, which was approved by voters in a 1796 referendum. Several important municipal buildings were constructed, including the courthouse in 1796 and the county prison built circa 1819. The Burlington County Prison was designed by Robert Mills, a nationally known architect who designed the Washington Monument. The town has numerous 18th and 19th-century buildings, most of which are included in the Mount Holly Historic District; it is listed in the New Jersey and National Register of Historic Places. Commercial buildings were constructed primarily along High Street.

A trolley station was built in 1904 for the passengers making connections to Burlington City and Moorestown. New municipal buildings were constructed during the 20th century, including the Town Hall on Washington Street (1930) and the U.S. Post Office (1935) located across the street (1935), both federally funded and constructed as Works Progress Administration projects under President Franklin D. Roosevelt during the Great Depression.

In the late 1950s, Mount Holly began to have economic difficulties due to industrial restructuring and the loss of working-class jobs. In the post-World War II period, numerous blue collar, family wage jobs disappeared as the community's traditional employers, the mills and dye factories, were shut down. At first these job losses were offset in part by gains at the nearby military bases, Fort Dix and McGuire Air Force Base, especially during the Vietnam War. In 1970, the residential vacancy rate in Mount Holly was 4.3%.

By 1980, however, the vacancy rate had climbed to 8.7% as a result of the nearby military installations' downsizing after the end of the Vietnam War. During this same period, 1970–1980, shopping malls proliferated in the suburban Philadelphia area, and retail business in Mount Holly suffered. Mount Holly received Urban Enterprise Zone (UEZ) status in 1995; it has provided tax incentives and other assistance programs to local businesses, including lowering the sales tax rate to 3½, half of the prevailing rate charges statewide. This has helped to revive the local small business base.

Clermont is an unincorporated community located within Mount Holly Township.

There were 3,456 households out of which 28.7% had children under the age of 18 living with them, 42.6% were married couples living together, 16.9% had a female householder with no husband present, and 34.5% were non-families. 27.4% of all households were made up of individuals, and 8.6% had someone living alone who was 65 years of age or older. The average household size was 2.61 and the average family size was 3.19.

There were 3,903 households out of which 32.0% had children under the age of 18 living with them, 44.0% were married couples living together, 17.3% had a female householder with no husband present, and 33.8% were non-families. 27.2% of all households were made up of individuals and 10.0% had someone living alone who was 65 years of age or older. The average household size was 2.64 and the average family size was 3.20.

Mount Holly is accessible at exit 5 of the New Jersey Turnpike via County Route 541.

NJ Transit provides bus service to Philadelphia on routes 317 (from Asbury Park) and 409/417/418 (from Trenton), with local service available on the 413 route between Camden and Burlington. 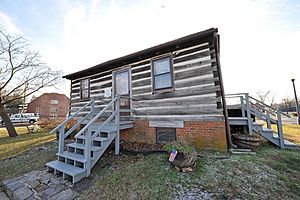 All content from Kiddle encyclopedia articles (including the article images and facts) can be freely used under Attribution-ShareAlike license, unless stated otherwise. Cite this article:
Mount Holly, New Jersey Facts for Kids. Kiddle Encyclopedia.