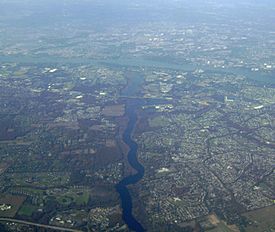 The main stem of Rancocas Creek between Interstate 295 and the Delaware River viewed from the air in November 2011.

Rancocas Creek is a tributary of the Delaware River in southwestern New Jersey in the United States. The creek's main stem is 8.3 miles (13.4 km) long, with a North Branch of 28.3 miles (45.5 km) and a South Branch flowing 21.7 miles (34.9 km). The creek system drains a rural agricultural and forested area on the western edge of the Pinelands north and northeast of Camden and the New Jersey suburbs of Philadelphia.

The South Branch rises in central Burlington County near Chatsworth and flows generally northwest. It receives the 13.8-mile-long (22.2 km) Southwest Branch from the south approximately 5 miles (8 km) south of Mount Holly. The North and South branches join near Rancocas State Park, approximately 3 miles (5 km) west of Mount Holly, near the crossing of the New Jersey Turnpike and Interstate 295. A few hundred yards downstream of the Interstate 295 and New Jersey Turnpike bridges, Burlington County Route 635 passes over the Creek on a bridge built less than 4 feet (1.2 m) over the average water level. This bridge has the capability for the center section of the bridge to swivel from the perpendicular to the river to parallel, to allow small boat traffic through. After rehabilitation of the bridge in the 1980s, the powered mechanism was removed due to the near-lack of creek barge traffic and expense of maintenance. The bridge may be opened in case of emergency, but requires manual labor to be swiveled open.

All content from Kiddle encyclopedia articles (including the article images and facts) can be freely used under Attribution-ShareAlike license, unless stated otherwise. Cite this article:
Rancocas Creek Facts for Kids. Kiddle Encyclopedia.