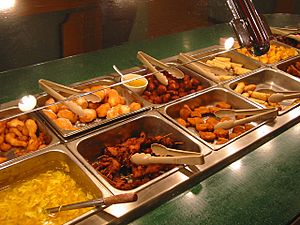 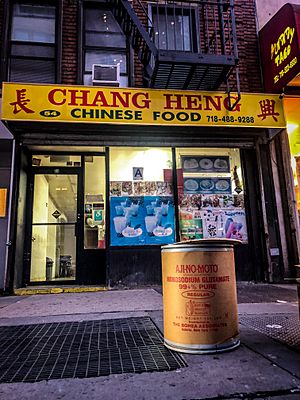 A Chinese restaurant is an establishment that serves a Chinese cuisine. Most of them are in the Cantonese style, due to the history of the Chinese diaspora and adapted to local taste preferences, as in the American Chinese cuisine and Canadian Chinese cuisine. The Chinese restaurants in the Netherlands usually combine Cantonese and Indonesian meals on their menu. Chinese takeouts (United States and Canada) or Chinese takeaways (United Kingdom and Commonwealth) are terms to describe the act of ordering the meal(s) with the intent to eat the food at another location, such as at work or home. It can be found either as a service option of eat-in establishments or as separate establishments.

However, Chinese restaurants in countries other than China have often been label as "unauthentic". People who have lived or visited China often claims that the Chinese food in China taste way better than the one's they get from their own countries. There are many Chinese restaurant in the U.S are operated by chefs from other countries even though they claim that they make authentic Chinese food. Panda Express is one of the chain restaurant that makes Chinese food, however most Chinese do not recognize that the food in Panda Express are actually Chinese food. Despite the fact that, there are many evidence suggest they actually are.

There has been a consequential component of Chinese emigration of illegal origin, most notably Fuzhou people from Fujian Province and Wenzhounese from Zhejiang Province in Mainland China, specifically destined to work in Chinese restaurants in New York City, beginning in the 1980s. Adapting Chinese cooking techniques to local produce and tastes has led to the development of American Chinese cuisine. Many of the Chinese restaurant menus in the U.S. are printed in Chinatown, Manhattan.

In the early 1880s, Chinese food items and eating houses appeared in London and Liverpool, mainly visited by Chinese seamen and students.

In 1884, Chinese food was made available as part of an exhibition featuring a 'restaurant' in the International Health Exhibition in South Kensington, London.

In 2003, the first British Chinese restaurant achieved a Michelin star. In the United Kingdom, the business employed a large percentage of Chinese immigrants in the 1980s (90% in 1985). Opening a restaurant or takeaway gave a relatively low capital cost entry for Chinese families into self-employment. Many takeaways served a pseudo-Chinese cuisine based around western tastes, and the limited cooking skills and experience of the shop owners.

In 2011, the Ming-Ai (London) Institute launched the British Chinese Food Culture project with a grant from the Heritage Lottery Fund, aimed at exploring and tracking the changes in Chinese food throughout its history in the United Kingdom.

The 2020 coronavirus pandemic has negatively impacted many Chinese restaurants in the UK, with a number of restaurants in London's Chinatown in particular facing financial difficulty, due to lockdown restrictions and social distancing as well as prejudice against Chinese takeaways which the BBC describe as "unfounded".

At the beginning of the 21st century, Chinese restaurants had been present in a significant majority of Australian cities and towns for over fifty years, and in many places for over one hundred and fifty years.

They emerged as commercial enterprises on the Victorian gold fields.

The significant majority of original Chinese migration came from Kwangtung Province in southern China, heavily influencing the style of food, consisting of fresh vegetables and fruit, with fish, poultry, and pork, with rice, herbs and spices.

One third of all cooks in Australia were Chinese by 1890.

In 2019, it was reported that the previous decade had seen a 22% decline in the number of Chinese-Indonesian restaurants in the Netherlands, whereas the number of other restaurants increased by 15%. Researchers attributed this to Chinese restaurants not meeting "modern" desires of consumers, including outdated décor and fatty food considered unappealing to an increasingly health-conscious population.

In 2020, a number of Chinese restaurants began trialling the use of service robots, including in Renesse and Maastricht.

A study published in 2019 raised concerns regarding labour trafficking in Chinese restaurants in the country, due to the migrants' "vulnerability to exploitation" and urged protection for migrants against "extreme forms of labour exploitation" seen across Europe.

In 1928, one of Germany's first Chinese restaurants opened in the Kantstraße region of Berlin, known for its large Chinese community.

Today, Chinese restaurants can be found throughout Germany to the extent that, in 2016, almost every German city with a population of over 15,000 has at least a single Chinese restaurant. The largest concentration is found in Berlin where restaurants have been known to pair traditional Szechuan- and Shanghai-inspired dishes with German wines. Many students from China and Hong Kong studying in Germany open Chinese restaurants.

The majority of Egypt's Chinese restaurants are found in Cairo, described by Slate in 2015 as "Shanghai on the Nile" due to its burgeoning Chinese food scene.

In 2000, periodical Flavor and Fortune recorded between 7 and 8 restaurants in Cairo and around "a dozen" in the country, although the number was increasing.

In 2020, Egypt's Health Ministry launched a campaign aimed at inspecting Chinese restaurants over food safety concerns in light of the COVID-19 epidemic, however Egypt denied reports that premises were being raided.

All content from Kiddle encyclopedia articles (including the article images and facts) can be freely used under Attribution-ShareAlike license, unless stated otherwise. Cite this article:
Chinese restaurant Facts for Kids. Kiddle Encyclopedia.