Canadian Chinese cuisine (French: Cuisine chinoise canadienne) is a popular style of Canadian cooking exclusive to take-out and dine-in eateries found across Canada. It was the first form of commercially available Chinese food in Canada. This cooking style was invented by early Cantonese immigrants who adapted traditional Chinese recipes to Western tastes and the available ingredients. This cuisine developed in a similar process to American Chinese cuisine. 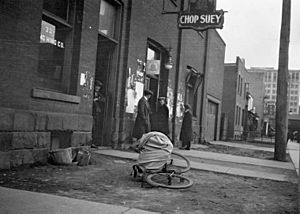 Signage in Toronto's First Chinatown for chop suey in 1923. Canadian Chinese cuisine dates back to the late 1800s.

Chinese workers were employed in the 1800s by Chinese labour contractors during the construction of the Canadian Pacific Railway linking Montreal, Québec with Vancouver, British Columbia. Many of those workers who stayed once the railway was completed resorted to opening small inexpensive restaurants or working as cooks in mining and logging camps, canneries, and in the private homes of the upper classes in cities and towns. They prepared variations on traditional Cantonese food that were well received by local patrons, and they were prized as cooks in wealthier households. This occurred despite the fact that few if any of them were formally trained chefs.

In most small towns in Western Canada, the Chinese "café" was the first restaurant established, and often the only one. People did not buy the foods of their own ethnic group since they could prepare these themselves, whereas Chinese food was a novelty. Furthermore, the Chinese community was not heavily involved in agriculture, so this presented an opportunity for an alternative source of income. Consequently, the Chinese community specialized in the restaurant business, and were able to undercut and out-compete later rivals. These Chinese restaurants became an icon of Prairie towns and served as a foothold for a new Canadian community, and this history is displayed in a new exhibit called Chop Suey on the Prairies at the Royal Alberta Museum.

In British Columbia, a form of buffet known as the "Chinese smörgåsbord" developed in pre-railway Gastown (the settlement that became Vancouver) when Scandinavian loggers and millworkers encouraged their Chinese cooks to turn a sideboard into a steam table, instead of bringing plates of single dishes to the dining table.

Following the introduction of the automobile and the drive-in restaurant, Chinese take-out service was augmented by Chinese drive-ins, including the now-vanished "Dragon Inn" chain, which was also known for its smörgåsbord.

Bill Wong, father of journalist Jan Wong, was a serial restaurateur in Montreal who reportedly opened the city's first Chinese buffet restaurant, "House of Wong" on Queen Mary Road in the heavily-Jewish Snowdon district in the 1950s. He later opened the now-closed iconic restaurant "Bill Wong's" on nearby Decarie Boulevard in 1962. 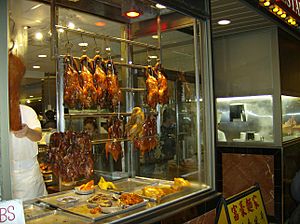 Roasted geese are put on display in Toronto's Old Chinatown. Roast goose is a popular Cantonese dish that is also served by Canadian Chinese restaurateurs.

Further Cantonese immigration to Canada began anew in the 1960s, and was ignited in the 1980s in anticipation of China's administrative take-over of Hong Kong. This resulted in many Hong Kong families relocating to Australia, the United States, the United Kingdom, and above all Canada.

This preference for Canada was due to its immigration policy, a high-standard of living, established Chinese community, and its membership in the Commonwealth. In contrast, the United States tended to accept more mainland or Taiwanese Chinese, while imposing immigration quotas on Commonwealth countries such as Hong Kong.

Today's Chinese Canadian citizens are the largest visible minority group in Canada, and Chinatowns are in every major Canadian city except Quebec City, with those in Toronto, Vancouver, Montreal, and Calgary being the largest. (For more, read Chinatowns in Canada) 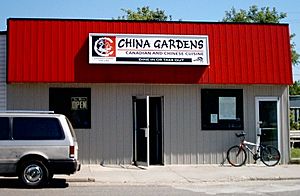 Even very small towns in most of Canada have at least one Canadian Chinese restaurant, and many[examples needed] can have two or more proprietors seeking out business, often right next to each other on the main street. Many towns that cannot support a single franchise restaurant still have a thriving Chinese food restaurant. However, many independent restaurants in larger cities have found their business shrinking as delivery chains and buffets squeeze out traditional sit-down restaurants.

In many towns and hamlets across the prairie provinces and in northern British Columbia, there can usually be found a Chinese café regardless of the community's size, serving "Canadian and Chinese cuisine" or, once more common, "Chinese and Western Food". In Glendon, Alberta, for example, next to a roadside model of the world's largest perogy (a staple of Ukrainian cuisine), sits the Perogy Café, which serves "Ukrainian and Chinese Perogies" (meaning pot stickers). This establishment is actually owned by a Vietnamese family.

Canadian Chinese chop suey houses are predominantly situated in non-immigrant neighbourhoods catering to non-Chinese customers. However, they are now most often mixed with those featuring the more traditional cuisines. 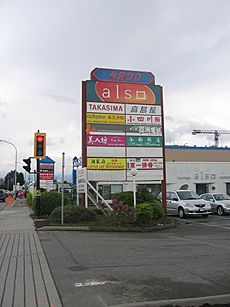 Restaurants in the newer Chinatowns, particularly in Vancouver and Toronto, tend to cater to recent Asian immigrants and offer more varied fare; Szechuan, Hakka, Chiuchow, Taiwanese, and even Buddhist cuisine restaurants can be found there. One of the largest concentration of Chinese restaurants in North America is located in the Golden Village area in Richmond, BC, a suburb of Vancouver, BC. The seafood served here is from the British Columbian coast.

Toronto's Old Chinatown has seen most of the once-famed restaurants on Dundas Street and Spadina Avenue close since the late 1990s, especially the Siu mei barbecue shops on Dundas Street that were located below grade. The 1990s also saw the closure of demise of Hsin Huang (or Hsin Kuang), a three-restaurant chain in the Greater Toronto Area, offering dim sum, Siu mei, and formal Chinese dining.

These restaurants, one at Chinese Centre at 888 Dundas Street East in Mississauga, another at Finch Avenue and Kennedy Road in Scarborough, and their four-storey flagship location at Spadina Avenue and St. Andrew Street (just north of Dundas Street) in old Toronto Chinatown, were decorated inside with the traditional red and yellow colours of the Fenghuang while the exterior was yellow and had a green Oriental roof.

In the newer suburban areas of the Greater Toronto Area, such as Highway 7 in Richmond Hill and Markham, the Chinese restaurants range from small eateries, Siu mei BBQ shops, and bakeries in Chinese strip malls and food courts, to the all-you-can-eat buffets that often expand beyond Chinese-Canadian to incorporate Asian fusion (including Japanese, Korean, and Thai), to the larger and more expensive places that often function as banquet halls with ten-course meals available. 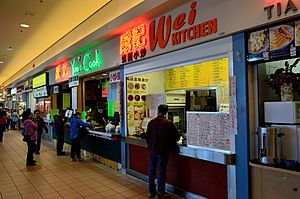 Among upscale restaurants, the older places will often have the traditional Chinese decor, which is red and yellow colours with the Fenghuang (Chinese dragon and phoenix) adorning the wall behind the dais, however newer establishments tend to be decorated in a more Western contemporary style.

Many of these fine dining restaurants and banquet halls often offer discounted dim sum lunches on weekdays and early weekends or to seniors, though this is a low margin segment, and their main earnings come from hosting weddings or other functions. Observers have noted that dim sum "cart service is a dying breed in Toronto, as more and more restaurants have switched over to a list-based dining experience. There are a few notable places where you can still witness these magical culinary carts being rolled out in front of you; and where you order by using your pointer finger, not a pen and paper." 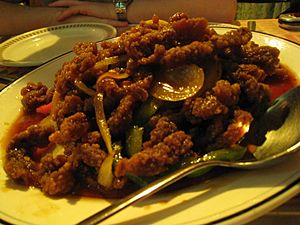 Ginger beef is an example of a unique Canadian Chinese dish, which was developed in Calgary during the 1970s.

Josephine Smart, a professor from the University of Calgary, has written on the evolution of Canadian Chinese cuisine. Her papers have examined the dynamics of localization and "authenticization" of Chinese food in Canada, and its implications for ethnic relations and the culture of consumption.

Chinese restaurants generally use either one of the romanization systems for Cantonese or an ad hoc romanization rather than the Pinyin romanization of Mandarin Chinese with which non-Chinese people are now most familiar.

Although the Canadian version of westernized Chinese cuisine is very similar to that found in the United States, there are a few distinctive regional dishes:

All content from Kiddle encyclopedia articles (including the article images and facts) can be freely used under Attribution-ShareAlike license, unless stated otherwise. Cite this article:
Canadian Chinese cuisine Facts for Kids. Kiddle Encyclopedia.