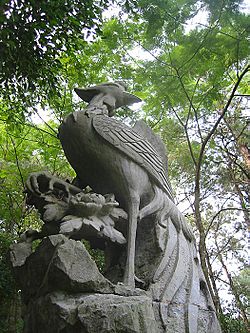 Fenghuang (Chinese: 鳳凰; Pinyin: Fènghuáng; Japanese: 鳳凰 hō-ō; Korean: 봉황 bonghwang; Vietnamese: Phượng Hoàng) is the name of two Chinese mythological birds, that were central figures in ancient Chinese cosmology. Sometimes called the Chinese Phoenix, the Fenghuang is a symbol of summer and spiritual balance, and along with the dragon, qilin and tortoise, is one of the most highly revered creatures in Chinese tradition. Its appearance is said to indicate some great event, or to bear testimony to the greatness of a ruler.

All content from Kiddle encyclopedia articles (including the article images and facts) can be freely used under Attribution-ShareAlike license, unless stated otherwise. Cite this article:
Fenghuang Facts for Kids. Kiddle Encyclopedia.