Immigration to Canada facts for kids 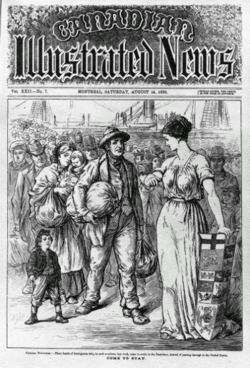 Come to Stay, printed in 1880 in the Canadian Illustrated News

Canada lets many people move to Canada. Because of this, there are some high percentages of non-Canadians in ethnicity results.

Even after Canadian colonization by the United Kingdom and France, there have been many other people coming to Canada in large groups.

In the 1700s, the French were settling in Quebec and Acadia, followed by some American and European movement.

After the American Revolution ended many Americans loyal to Britain went to Canada as it was the last main territory in North America still loyal to the Crown.

The War of 1812 promoted British and Irish immigration to Canada. Some British officers went to Canada, fearing that the Americans would invade Canada. While Irish immigration was still high, eventually some went to the United States.

Others went to Canada from America, especially during the Klondike Gold Rush.

This time, many people went to Canada from Europe. A large spike in the third group was pre-World War I.

This group saw an increase in Asian immigrants.

All content from Kiddle encyclopedia articles (including the article images and facts) can be freely used under Attribution-ShareAlike license, unless stated otherwise. Cite this article:
Immigration to Canada Facts for Kids. Kiddle Encyclopedia.