Hammonton was settled in 1812 and was named for John Hammond Coffin, a son of one of the community's earliest settlers, William Coffin, with the "d" in what was originally "Hammondton" disappearing over time. It was incorporated as a town by an act of the New Jersey Legislature on March 5, 1866, from portions of Hamilton Township and Mullica Township. It is located directly between Philadelphia and the resort town of Atlantic City, along a former route of the Pennsylvania Railroad that is used by NJ Transit's Atlantic City Line.

The town borders Folsom borough, to the southwest, and both Hamilton and Mullica townships to the southeast in Atlantic County; Shamong Township and Washington Township in Burlington County to the northeast; and Waterford Township and Winslow Township in Camden County to the northwest. It is located in the Atlantic Coastal Plain, so is largely flat, though the highest point in Atlantic County is located along the Pennsylvania Railroad within the borders of Hammonton. The town is located almost exactly halfway between Philadelphia and Atlantic City.

The town is one of 56 South Jersey municipalities that are included within the New Jersey Pinelands National Reserve, a protected natural area of unique ecology covering 1,100,000 acres (450,000 ha), that has been classified as a United States Biosphere Reserve and established by Congress in 1978 as the nation's first National Reserve. All of the town is included in the state-designated Pinelands Area, which includes portions of Atlantic County, along with areas in Burlington, Camden, Cape May, Cumberland, Gloucester and Ocean counties.

Hammonton lies in the northern reaches of the humid subtropical climate zone, and, similar to inland southern New Jersey, is characterized by brisk winters, hot summers, and plentiful precipitation spread evenly throughout the year. According to the Köppen Climate Classification system, Hammonton's climate is abbreviated "Cfa" on climate maps. 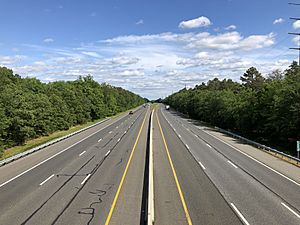 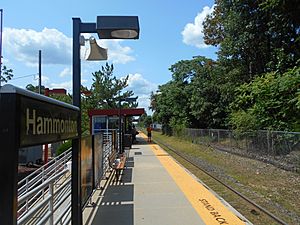 NJ Transit provides bus service in Hammonton on the 554 route between Lindenwold station and Atlantic City.

Hammonton is known as the "Blueberry Capital of the World."

Since the 1980s, the Red, White and Blueberry Festival has celebrated Hammonton's status as the nation's blueberry capital. The Hammonton Wine Festival, a fundraiser for the area Rotary Club, celebrates the area's winemakers.

Ronald Reagan visited Hammonton during his 1984 re-election campaign. Reagan's speech highlighted Hammonton's status as "Blueberry Capital of the World" and then extolled the virtues of New Jersey native Bruce Springsteen.

Hammonton has also been visited by Ulysses S. Grant and Theodore Roosevelt, who made whistle stops in the town. 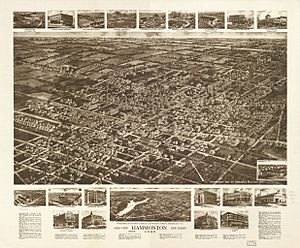 Every year the downtown has two major parades which are the Halloween and Christmas parades. It also hosts a smaller parade every year, the Memorial Day parade. the Downtown also host the annual Christmas Tree Lighting, which is a large celebration that includes, the lighting of a large tree on the corner of Bellevue and Central Avenue, Christmas carolers, a music show, carriage rides, a live nativity and the arrival of Santa. During these events the downtown stores are open late.

On the third Thursday of every month, the downtown host the "Third Thursday Events", with a different theme each month. Stores offer discounts, and people perform on the street.

The downtown was one of the finalist for the Great American Main Street Award in 2013. The award recognizes three communities each year for their successful revitalization efforts, based on documented economic impact, small-business development, historic preservation, volunteer involvement, public/private cooperation and success over time.

In 1949, Hammonton was the winner of the Little League World Series, after finishing third in the tournament in both 1947 and 1948. The Hammonton team was the first official team located outside of Pennsylvania.

On July 24, 2011, Ricca's Italian Bakery set a Guinness World Record for the Longest Line of Cakes.

In November 2014, in a study conducted by CreditDonkey.com, Hammonton was ranked second-happiest city in New Jersey. The ranking was based on restaurants, crime rate, commute, departure time, income, divorce rate, and housing.

On June 7, 2013, the Eagle Theatre in Hammonton became the first theater in New Jersey to sell alcoholic beverages and allow spectators to drink wine during the show. Under an arrangement reached under the authority of the New Jersey Division of Alcoholic Beverage Control, Sharrott Winery will be able to sell patrons bottles of wine that can be consumed during shows at the theater.

The 2002 film, 13th Child, about the hunt for the Jersey Devil, was filmed in Hammonton. The film featured big names such as Cliff Robertson, Lesley-Anne Down, and Christopher Atkins.

A 2011 episode of Supernatural, "How to Win Friends and Influence Monsters" about the Jersey Devil, is set in Hammonton, though it wasn't filmed there.

Hammonton made a cameo appearance in the first two episodes of the HBO series Boardwalk Empire, with a scene towards the end of both episodes showing the town sign "Welcome to Hammonton, The Blueberry Capital of the World".

The Fox TV show American Idol aired its first episode of its 12th season in January 2013 with a performance by Sarah Restuccio, a seventeen-year-old girl from Hammonton. The judges enjoyed her rendition of "Mama's Song" by Carrie Underwood, but she impressed them when they asked her to sing something else and she rapped "Super Bass" by Nicki Minaj. The show featured a short clip about Sarah's life, which included showing her everyday life in Hammonton.

In October 2013 the MTV reality show True Life, featured the episode "True Life Presents: My Dad Is A Bro" about a girl in her twenties and her father in his fifties, who both party. The episode takes place throughout Hammonton.

In the summer of 2013, scenes from the independent film The Honour were filmed in Hammonton.

In May 2015, a commercial for the male clothing brand, Chubbies Shorts, was filmed on South Second Street in Hammonton.

In 1997, Gabriel Donio (founder and publisher of The Hammonton Gazette) proposed a minor-league baseball team called the Hammonton Blueberries, going so far as to create a team logo and a prototype uniform, as well as purchasing a 20-acre tract of land for $200,000. Donio planned to build on the site a 3,500-seat, six-million-dollar ballpark, which he described as "a rough miniature of the Brooklyn Dodgers' Ebbets Field". In 1999, the Northern League announced that they would form a six-team developmental circuit and include Hammonton as one of the clubs; however, this did not happen, and the proposed ballpark was not built, putting an end to the Blueberries. (Since Hammonton is less than 75 miles from Philadelphia, any pro baseball team there would either need permission from the Phillies or play in an independent league, outside of MLB's jurisdiction.)

Hammonton is home of the Catholic schools St. Joseph Regional Elementary School (for PreK-8) and St. Joseph High School (for grades 9-12) which operate under the jurisdiction of the Diocese of Camden. In April 2020, the Diocese of Camden announced that despite its status as a football powerhouse, St. Joseph was one of five Catholic schools in New Jersey which would close permanently at the end of the school year on June 30, 2020. St. Joseph Regional Elementary was to permanently close at the end of the school year as well.

People who were born in, residents of, or otherwise closely associated with Hammonton include:

All content from Kiddle encyclopedia articles (including the article images and facts) can be freely used under Attribution-ShareAlike license, unless stated otherwise. Cite this article:
Hammonton, New Jersey Facts for Kids. Kiddle Encyclopedia.