Salem County is a county located in the U.S. state of New Jersey. Its western boundary is formed by the Delaware River and it has the eastern terminus of the Delaware Memorial Bridge, connecting to New Castle, Delaware. Its county seat is Salem. The county is part of the Delaware Valley area. As of the 2016 Census estimate, the county's population was 63,436, making it the state's least-populous county, representing a 4.0% decrease from the 66,083 enumerated at the 2010 Census, in turn increasing by 1,798 (+2.8%) from the 64,285 counted in the 2000 Census, retaining its position as the state's least populous county. The most populous place was Pennsville Township, with 13,409 residents at the time of the 2010 Census. Lower Alloways Creek Township covers 72.46 square miles (187.7 km2), the largest total area of any municipality.

European settlement began with English colonists in the seventeenth century, who were settling both sides of the Delaware River. They established a colonial court in the area in 1681, but Salem County was first formally organized within West Jersey on May 17, 1694, from the Salem Tenth. Pittsgrove Township was transferred to Cumberland County in April 1867, but was restored to Salem County in February 1868. The area was initially settled by Quakers.

Judge William Hancock of the King's Court presided at the courthouse. He was later killed by the British in the American Revolutionary War during the massacre at Hancock House committed by the British against local militia during the Salem Raid in 1778. Afterward the courthouse was the site of the "treason trials," wherein suspected Loyalists were put on trial for having allegedly aided the British during the Salem Raid. Four men were convicted and sentenced to death for treason; however, they were pardoned by Governor William Livingston and exiled from New Jersey. The courthouse is also the site of the legend of Colonel Robert Gibbon Johnson's proving the edibility of the tomato. Before 1820, Americans often assumed tomatoes were poisonous. In 1820, Colonel Johnson, according to legend, stood upon the courthouse steps and ate tomatoes in front of a large crowd assembled to watch him do so.

Salem County is notable for its distinctive Quaker-inspired architecture and masonry styles of the 18th century. It had a rural and agricultural economy. In the early 20th century, its towns received numerous immigrants from eastern and southern Europe, who markedly added to the population. In the period following World War II, the county's population increased due to suburban development. To accommodate increasing traffic, the Delaware Memorial Bridge was built from Salem County to New Castle, Delaware.

The terrain is almost uniformly flat coastal plain, with minimal relief. The highest elevation in the county has never been determined with any specificity, but is likely one of seven low rises in Upper Pittsgrove Township that reach approximately 160 feet (49 m) in elevation. Sea level is the lowest point.

The county adjoins the following areas:

1across Delaware Bay; no land border

There were 25,290 households out of which 29% had children under the age of 18 living with them, 49.9% were married couples living together, 14.4% had a female householder with no husband present, and 30.6% were non-families. 25.4% of all households were made up of individuals, and 10.9% had someone living alone who was 65 years of age or older. The average household size was 2.56 and the average family size was 3.07. 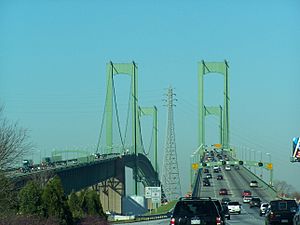 Limited access roads include Interstate 295 and the New Jersey Turnpike. Both highways pass through the northern part of the county. Only one turnpike interchange is located in Salem: Exit 1 in Carneys Point (which is also where the turnpike ends). There are a pair of service areas on the Turnpike, both located between exits 1 and 2 in Oldmans Township: The John Fenwic Service Area on the northbound side and the Clara Barton Service Area in the southbound direction.

The Delaware Memorial Bridge (which is signed as I-295/US 40) is a set of twin suspension bridges crossing the Delaware River.Connecting New Castle, Delaware and Pennsville Township, the original span was opened in 1951 and the second span in 1968. 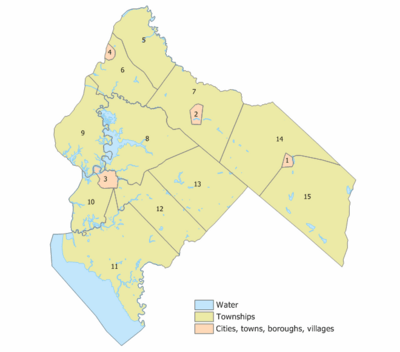 Municipalities in Salem County (with 2010 Census data for population, housing units and area in square miles) are: Other, unincorporated communities in the county are listed next to their parent municipality. Some of these areas are census-designated places (CDPs) that have been created by the United States Census Bureau for enumeration purposes within a Township. Other communities and enclaves that exist within a municipality are also listed next to the name.

All content from Kiddle encyclopedia articles (including the article images and facts) can be freely used under Attribution-ShareAlike license, unless stated otherwise. Cite this article:
Salem County, New Jersey Facts for Kids. Kiddle Encyclopedia.