Salem shares an artificial Island in the Delaware Bay with the Hope Creek Nuclear Power Plant.

The Nuclear Regulatory Commission defines two emergency planning zones around nuclear power plants: a plume exposure pathway zone with a radius of 10 miles (16 km), concerned primarily with exposure to, and inhalation of, airborne radioactive contamination, and an ingestion pathway zone of about 50 miles (80 km), concerned primarily with ingestion of food and liquid contaminated by radioactivity.

The New York Times has reported that, in the 1990s, the Salem reactors were shut down for two years because of maintenance problems. Consultants found several difficulties, including a leaky generator, unreliable controls on a reactor, and workers who feared that reporting problems would lead to retaliation. In 2004, the Nuclear Regulatory Commission took on additional oversight of the Salem plants and increased the monitoring of them.

An extensive investigation by the Nuclear Regulatory Commission, and the subsequent review by hired consultants have found many minor problems, such as lack of routine maintenance and low morale among personnel, but declared the plant safe.

On Thursday, August 22, 2013, the Salem Nuclear plant was shut down after a leak of slightly radioactive water. The spill was confined to the plant's containment building, and regulators have said there is no risk to the public. The plant restarted on August 24, after having been shut down for less than 48 hours.

In May 2014 a scheduled refueling outage of Salem 2 was extended after broken bolts from a cooling pump were found in the reactor vessel. Westinghouse dispatched a team to inspect the pumps. The inspection revealed bolts in the bottom of the cooling pumps as well as the bottom of the reactor vessel. Unit 2 was returned to service on July 11, 2014. 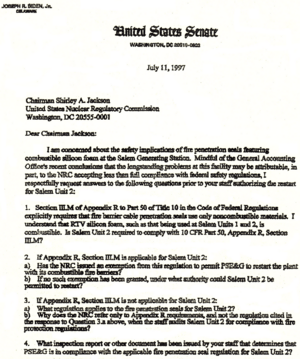 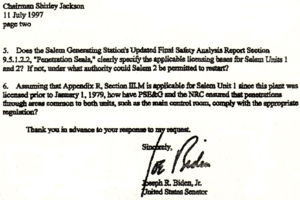 The Nuclear Regulatory Commission's estimate of the risk each year of an earthquake intense enough to cause core damage to the reactor at Salem was 1 in 90,909, according to an NRC study published in August 2010. 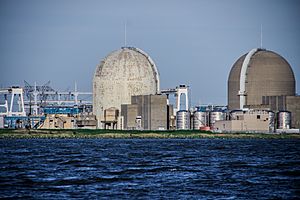 Both reactors use Delaware Bay as a source of cooling water. Salem units 1 and 2 have a water-intake building with a rotating screen to collect debris that is later washed off. Sometimes thick layers of grass clog the intakes and the reactors run at reduced power for weeks as a result. All of the waste heat produced in the steam cycle (about 2 gigawatts) is dumped into the bay. The resultant increase in water temperature is regulated to less than 1 °C in summer months, and to 2 °C the rest of the year. The large closed-cycle cooling tower on site is part of the neighboring Hope Creek plant and is not used by the Salem reactors.

All content from Kiddle encyclopedia articles (including the article images and facts) can be freely used under Attribution-ShareAlike license, unless stated otherwise. Cite this article:
Salem Nuclear Power Plant Facts for Kids. Kiddle Encyclopedia.