Ventnor City was incorporated as a city by an act of the New Jersey Legislature on March 17, 1903, from portions of Egg Harbor Township.

Mrs. S. Bartram Richards, the wife of the secretary-treasurer of the Camden and Atlantic Land Company, suggested the name "Ventnor" for the area then being developed by the company south of Atlantic City, having recently visited the seashore resort in England on the Isle of Wight with the same name. The name was chosen in January 1889. The city was formally incorporated by the New Jersey Legislature on March 17, 1903.

Chapter 51 of the laws and Sessions of the State of New Jersey provided the beginning to Ventnor City stating, "Be it enacted by the Senate and General Assembly of New Jersey that all part or portion of the County of Atlantic, formerly a part of Egg Harbor Township, situated on Absecon Beach, lying between the Westwardly limit of Atlantic City and the Eastwardly limit of South Atlantic City, the Atlantic Ocean on the south as far as the jurisdiction of the State extends, and to the center of Beach Thoroughfare on the North, be, and is hereby constituted as a City of this State, and all of the inhabitants of the State residing within the limits aforesaid be and they are hereby ordained, constituted and declared to be from time to time forever hereafter one body politic and corporate, in fact and in name, by the name, Ventnor City. This act shall take effect immediately, and was approved on March 17, 1903."

The first meeting was held on April 20, 1903, in the Carisbrooke Inn, which was located behind the present City Hall, on Atlantic Avenue between Cambridge and Sacramento Avenues; Carisbrooke is also a place name taken from the Isle of Wight.

The city is located on 8.1-mile (13.0 km) long Absecon Island, along with Atlantic City to the northeast, and Margate City and Longport on the southwest.

The climate in this area is characterized by hot, humid summers and generally mild to cool winters. According to the Köppen Climate Classification system, Ventnor City has a humid subtropical climate, abbreviated "Cfa" on climate maps. 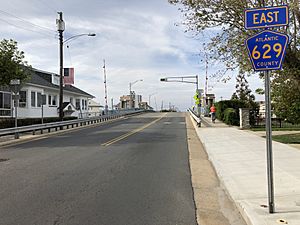 Dorset Avenue Bridge is a double-leaf bascule drawbridge across the Intracoastal Waterway (ICW) Inside Thorofare. Its operation is federally regulated. The bridge serves as a link in County Route 629.

NJ Transit provides bus service in the city to Atlantic City on routes 504 (from Ventnor Plaza) and 505 (from Longport).

The Ventnor City School District serves public school students in pre-kindergarten through eighth grade. The district's motto is VECC: We Think Achievement. As of the 2018–19 school year, the district, comprised of two schools, had an enrollment of 684 students and 70.5 classroom teachers (on an FTE basis), for a student–teacher ratio of 9.7:1. The Ventnor City School District operates two schools for PreK-8 within the Ventnor Educational Community Complex. Schools in the district (with 2018–19 enrollment data from the National Center for Education Statistics) are Ventnor Elementary School with 376 students in grades PreK-5 and Ventnor Middle School with 286 students in grades 6–8.

Public school students in ninth through twelfth grades, along with those from Brigantine and Margate City, attend Atlantic City High School in neighboring Atlantic City, as part of a sending/receiving relationship with the Atlantic City School District that has existed since 1920. As of the 2018–19 school year, the high school had an enrollment of 1,796 students and 153.0 classroom teachers (on an FTE basis), for a student–teacher ratio of 11.7:1. The Ventnor district has considered options for an alternative high school sending relationship.

The Roman Catholic Diocese of Camden operated St. James School, a K-8 school, until 2008, when it merged with Blessed Sacrament School in Margate City into Holy Family Regional School (using the St. James site). By 2011 it had a loss of $172,000 and only had 92 students. The sponsoring churches of Holy Family were Holy Trinity Church in Ventnor and St. Gianna Beretta Church of Northfield. The diocese announced that it would close Holy Family at the end of the 2010–11 school year, as its enrollment was insufficient to cover the deficit. The building was demolished in 2016.

People who were born in, residents of, or otherwise closely associated with Ventnor City include:

All content from Kiddle encyclopedia articles (including the article images and facts) can be freely used under Attribution-ShareAlike license, unless stated otherwise. Cite this article:
Ventnor City, New Jersey Facts for Kids. Kiddle Encyclopedia.