James Long, an absentee owner, purchased a parcel in 1857 that grew over the years as sand accumulated and as additional property was purchased. Acquired by M. Simpson McCullough in 1882, the community was named Longport in honor of Long.

Longport was incorporated as a borough by an act of the New Jersey Legislature on March 7, 1898, from portions of Egg Harbor Township. 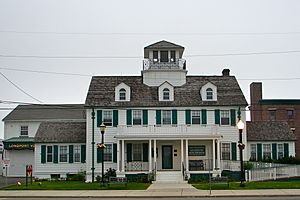 Longport is located on the southwest corner of 8.1-mile (13.0 km) long Absecon Island, along with Margate City, Ventnor City and Atlantic City to the northeast. 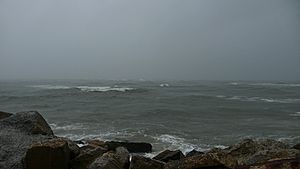 Streets at the southern end of the borough start at 11th Street, as the 180 acres (73 ha) that made up the ten numbered streets below it were washed out on the barrier island by a series of storms between 1900 and 1916. The Great Egg Harbor Inlet shifted north, and Ocean City island was extended by what is now the Gardens neighborhood of that city. 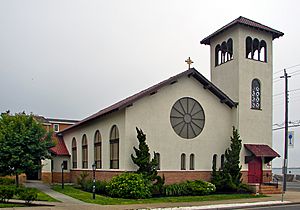 Church of the Redeemer, which has now burned down as a result of a derecho in June 2012. The church was rebuilt and reopened in July 2015.

There were 470 households out of which 11.1% had children under the age of 18 living with them, 45.1% were married couples living together, 5.1% had a female householder with no husband present, and 46.4% were non-families. 43.2% of all households were made up of individuals, and 25.3% had someone living alone who was 65 years of age or older. The average household size was 1.90 and the average family size was 2.61.

There were 544 households, out of which 10.8% had children under the age of 18 living with them, 51.3% were married couples living together, 5.1% had a female householder with no husband present, and 41.7% were non-families. 37.5% of all households were made up of individuals, and 19.3% had someone living alone who was 65 years of age or older. The average household size was 1.94 and the average family size was 2.53.

Longport offers surfing and other water sports recreation on the beaches at 32nd Avenue and Pelham Avenue. 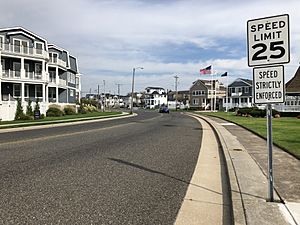 No Interstate, U.S., state or major county highways directly serve Longport. The only numbered roads in Longport are minor county routes, such as County Route 629.

There is access to and from the mainland and Ocean City by way of a series of bridges and causeways including the JFK Memorial Bridge, The Ocean City Bridge, and the Dolores G. Cooper Bridge, also known as Longport-Somers Point Boulevard.

NJ Transit provides bus service on the 505 route between the borough and Atlantic City.

For kindergarten through eighth grade, public school students from Longport attend the Margate City Schools in Margate City as part of a sending/receiving relationship. Longport is a non-operating school district that had 49 students in the Margate district and 8 in Atlantic City for high school as of 2010, operating with a three-member board of education that oversaw its relationships with its sending districts. As of the 2018–19 school year, the district, comprised of two schools, had an enrollment of 351 students and 48.8 classroom teachers (on an FTE basis), for a student–teacher ratio of 7.2:1. Schools in the district (with 2018–19 enrollment data from the National Center for Education Statistics) are William H. Ross III Elementary School 169 students in grades K-4 and Eugene A. Tighe Middle School with 181 students in grades 5-8.

Starting in the 2014–15 school year, public school students from Longport in grades 9-12 attend Ocean City High School as part of a sending/receiving relationship with the Ocean City School District; the Longport district, which is closer to Ocean City and would save significantly on tuition costs per student, received permission from the New Jersey Department of Education to end the relationship with Atlantic City. As of the 2018–19 school year, Ocean City High School had an enrollment of 1,245 students and 98.5 classroom teachers (on an FTE basis), for a student–teacher ratio of 12.6:1.

Through the 2013–14 school year, Longport's students had attended Atlantic City High School, along with those from Brigantine, Margate City and Ventnor City, as part of a sending/receiving relationship with the Atlantic City School District. The Longport Board of Education had investigated the possibility of offering city students the option of attending either Atlantic City High School or Ocean City High School, as part of an effort to control the costs for the average of ten Longport students sent to attend public high school annually. With the Atlantic City district charging tuition estimated at nearly $24,000 per student as of 2013–14 and the Ocean City School District charging 25% less per student, district officials estimated prospective savings of $128,000 in the first five years, though those savings could disappear if more of the nearly two-thirds of students attending private high schools were to shift to choose the new Ocean City option. In June 2014, the Acting State Commissioner of Education approved the end of the relationship with the Atlantic City district under which Longport's students could start attending Ocean City High School starting with the 2014–15 school year.

Private school options in the area include Holy Spirit High School in Absecon, under the Roman Catholic Diocese of Camden and St. Augustine Preparatory School, which is an all-boys Augustinian, Catholic college preparatory institution.

People who were born in, residents of, or otherwise closely associated with Longport include:

All content from Kiddle encyclopedia articles (including the article images and facts) can be freely used under Attribution-ShareAlike license, unless stated otherwise. Cite this article:
Longport, New Jersey Facts for Kids. Kiddle Encyclopedia.