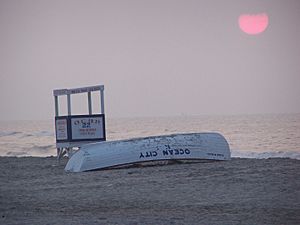 The sun rising over an Ocean City beach 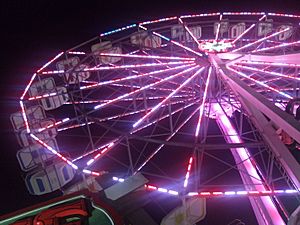 Ferris Wheel on the Boardwalk

Known as a family-oriented seaside resort, Ocean City has prohibited the sale of alcoholic beverages within its limits since its founding in 1879, offering miles of guarded beaches, a boardwalk that stretches for 2.5 miles (4.0 km), and a downtown shopping and dining district.

From early June through Labor Day, Ocean City requires individuals age 12 and up to purchase a beach tag to access its beaches. For the 2015 season, a one-day pass cost $5, a weekly pass was $10, and a seasonal pass for the full summer season was $25 (though, if purchased before June 1, seasonal tags were $20.)

The island, a stretch of dunes and swamps running for seven miles, had been used by local Native Americans who were brought there by its abundance of fish during the summer months. Originally purchased by the Somers family, the island had once been named Peck's Beach, believed to have been given the name for a whaler named John Peck who had a camp on the island.

In 1700, whaler John Peck began using the barrier island as a storage place for freshly caught whales. Eventually known as Peck's Beach, the island had several purposes: it was an Indian summer fishing camp, cattle-grazing area, and sometimes mainlanders would boat over for a picnic or to hunt.

On September 10, 1879, four Methodist ministers, Ezra B. Lake, James Lake, S. Wesley Lake, and William Burrell, chose the island as a suitable spot to establish a Christian retreat and camp meeting on the order of Ocean Grove. They met under a tall cedar tree, which stands today in the lobby of the Ocean City Tabernacle. Having chosen the name "Ocean City", the founders incorporated the Ocean City Association, laid out street and lots for cottages, hotel and businesses. The Ocean City Tabernacle was built between Wesley and Asbury Avenues and between 5th and 6th Streets. Camp meetings were held by the following summer. As a result of its religious origins, the sale or public drinking of alcoholic beverages in Ocean City was prohibited.

The first bridge to the island was built in 1883, and the first railroad soon followed. The first school began in 1881. The boardwalk grew and was relocated several times. The ship Sindia joined other shipwrecks on the beach on December 15, 1901, on its way to New York City from Kobe, Japan, but has since sunk below the sand. A salvage attempt to retrieve treasures believed to have been on the ship was most recently launched in the 1970s, all of which have been unsuccessful. A large fire in 1927 changed the city significantly, causing $1.5 million in damage and leading the city to move the boardwalk closer to the ocean, which resulted in the greater potential for damage from saltwater. 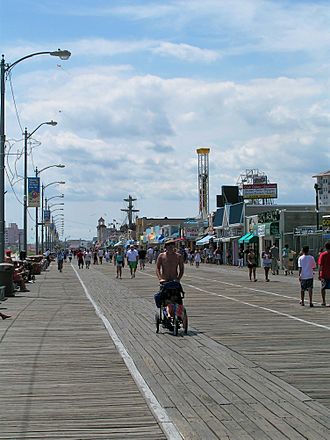 The Ocean City boardwalk is one of the most recognizable landmarks in the resort. It is also one of the most well-known boardwalks in the world. long and runs north from 23rd Street to St. James Place, with mile markers for people who are exercising.

The boardwalk was first built in 1880 from the Second Street wharf to Fourth Street and West Avenue. In 1885, plans to extend the boardwalk along the entire beach were made as the city's first amusement house, a pavilion on the beach at 11th street called "The Excursion" opened. A second amusement park, the "I.G. Adams pavilion", at Ninth Street and the boardwalk, opened soon after but was destroyed by fire in 1893. Following a second catastrophic fire in 1927, the boardwalk and its businesses were rebuilt 300 feet (91 m) closer to the ocean on concrete pilings, with parking created for cars in the space where the buildings and boardwalk once stood. The Ocean City Music Pier partially opened one year later, with work completed in time for the 1929 season.

In 1965, the Wonderland Amusement Park opened on the boardwalk at 6th Street, which is now known as "Gillian's Wonderland Pier". Runaway Train, a steel twister, is the only major coaster that operates there. Playland's Castaway Cove, is located on the boardwalk at 10th Street. Two major roller coasters operated there, which were the Python, a looping coaster, and the Flitzer, a wild mouse coaster. A new major shuttle coaster at Castaway Cove, Storm, was planned to be finished in summer 2013. The two older coasters (Python and Flitzer) were removed and for the 2016 summer season, a new ride called "GaleForce" is under construction, which will be a high thrill roller coaster with three linear synchronous motor launches reaching speeds of 64 miles per hour (103 km/h) and a 125-foot (38 m) beyond vertical drop. The new "Wild Waves" ride will be a family-oriented coaster, with a height of 50 feet (15 m), that will wrap around the GaleForce coaster. The new "Whirlwind" ride is a figure eight kiddie coaster with spinning cars.

There is also a water park located on the boardwalk called "OC Waterpark", open during the summer months.

In 2007 controversy emerged about the city's proposed use of ipê, a type of wood, to re-deck parts of the boardwalk. Environmental activists protested against the city's use of the wood, but the plan went ahead.

Today, there are bike and surrey rentals available along many boardwalk cross streets, but bikes and surreys can only be ridden on the boardwalk before noon during the summer. Attractions along the boardwalk include two family amusement parks with rides and games, an arcade, the Music Pier, a water park and various themed miniature golf courses. The Ocean City boardwalk has a wide variety of dining options, from sit-down restaurants to funnel cake.

Unincorporated communities, localities and place names located partially or completely within the city include Peck Beach.

There were 5,890 households out of which 14.8% had children under the age of 18 living with them, 40.6% were married couples living together, 8.8% had a female householder with no husband present, and 47.6% were non-families. 42.1% of all households were made up of individuals, and 21.3% had someone living alone who was 65 years of age or older. The average household size was 1.98 and the average family size was 2.68.

There were 7,464 households out of which 16.9% had children under the age of 18 living with them, 41.9% were married couples living together, 9.2% had a female householder with no husband present, and 46.3% were non-families. 40.4% of all households were made up of individuals and 17.7% had someone living alone who was 65 years of age or older. The average household size was 2.02 and the average family size was 2.71.

NJ Transit provides bus service to the Port Authority Bus Terminal in Midtown Manhattan on the 319 route and to Atlantic City on the 507 and 509 routes.

All content from Kiddle encyclopedia articles (including the article images and facts) can be freely used under Attribution-ShareAlike license, unless stated otherwise. Cite this article:
Ocean City, New Jersey Facts for Kids. Kiddle Encyclopedia.