Hockessin is a census-designated place (CDP) in New Castle County, Delaware, United States. The population was 13,527 at the 2010 census.

There were 4,464 households, out of which 40.1% had children under the age of 18 living with them, 77.3% were married couples living together, 4.5% had a female householder with no husband present, and 16.4% were non-families. 13.9% of all households were made up of individuals, and 8.9% had someone living alone who was 65 years of age or older. The average household size was 2.83 and the average family size was 3.13.

Hockessin traces its roots to 1688.

The first Roman Catholic church in Delaware was located in Hockessin. Missionary priests from Maryland established the Coffee Run Mission in 1790.

Hockessin hosts several Fourth of July activities for the area residents. Local groups parade down Old Lancaster Pike, neighborhoods compete in different athletic events, and there is a fireworks display in the evening in Swift Park.

Portrayal in the media

Although Hockessin is primarily a bedroom community, there are several mushroom farms operating in the area.

Hockessin is served by the Red Clay Consolidated School District for public education. 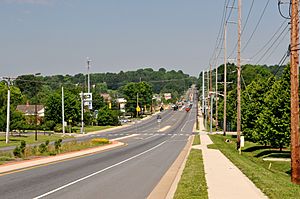 The main road through Hockessin is Delaware Route 41 (Lancaster Pike) which heads southeast toward Wilmington and northwest toward the Pennsylvania border, where it becomes Pennsylvania Route 41 and continues toward Lancaster. South of Hockessin, Delaware Route 48 splits from DE 41 to follow Lancaster Pike to Wilmington while DE 41 continues along Newport Gap Pike to Prices Corner. Delaware Route 7 passes through the western part of Hockessin along Limestone Road, heading north to the Pennsylvania border and south toward Pike Creek and Christiana. The northern terminus of the Wilmington and Western Railroad, a tourist railroad, is in Hockessin; the railroad follows the Red Clay Creek valley south to Greenbank. DART First State provides bus service to Hockessin along Route 20, which follows Lancaster Pike to Wilmington and ends at the Wilmington station served by Amtrak and SEPTA Regional Rail's Wilmington/Newark Line. DART First State's Route 20 bus serves park and ride lots located at Hockessin Memorial Hall and the Wells Fargo bank.

All content from Kiddle encyclopedia articles (including the article images and facts) can be freely used under Attribution-ShareAlike license, unless stated otherwise. Cite this article:
Hockessin, Delaware Facts for Kids. Kiddle Encyclopedia.