Built in 1907 as Pennsylvania Station, the station was renamed in 2011 for then-Vice President (now President) Joe Biden, an advocate for passenger rail who routinely took the train from Wilmington to Washington, D.C. during his time as a Senator from 1973 to 2008. In 1987, Biden formally announced his ultimately unsuccessful bid for the 1988 Democratic Presidential Nomination at this station. Located on Front Street between French and Walnut Streets in downtown Wilmington, the station has one inside level with stores, a cafe/newsstand, an Amtrak ticket office (the SEPTA/DART First State ticket office closed in 2020), a car rental office, and restrooms. Passengers board their trains on the second-story train platforms. 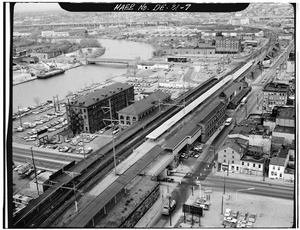 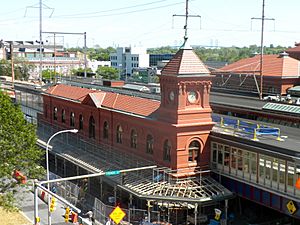 The station in 2010 during renovation

The station replaced an earlier station erected by the Philadelphia, Wilmington and Baltimore Railroad.

Admired for his use of new and innovative materials and his forceful architectural statements, Furness chose to have the trains move right through the second floor of the station, with room for a ticketing and retail concourse at ground level underneath the tracks. This unconventional arrangement celebrated the power of the locomotive and America's industrial strength. The north end of the station has a four-faced rectangular clock tower that rises an extra story above the main roof. It is decorated with stone and terra cotta work that is repeated in plainer form throughout the station.

In 2009, the station began a two-year restoration; about two-thirds of the $37.7 million in funding came from United States government stimulus funds. During construction, customer operations, including platform access, were moved to a temporary station next door. The station reopened on December 6, 2010, and final work was completed in March 2011.

On March 19, 2011, the station's name was changed from Wilmington Station to Joseph R. Biden, Jr., Railroad Station. The ceremony honored U.S. Vice President (now President) Joe Biden, who took over 7,000 round trips from the station to Washington, D.C. during his U.S. Senate career and was noted as an advocate for Amtrak and passenger rail more generally. On January 20, 2017, within an hour after completing his tenure as Vice President, Biden boarded an Amtrak Acela train in Washington, D.C. bound for his namesake station. 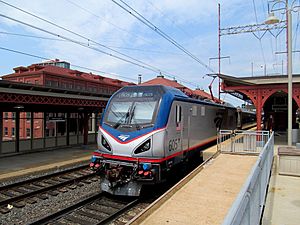 The station is served by Amtrak Northeast Regional and Acela trains along the Northeast Corridor going south to Baltimore and Washington, D.C., and going north to Philadelphia, New York City, and Boston. It is also served by several long distance trains including the Cardinal to Chicago, the Carolinian to Charlotte, the Crescent to New Orleans, the Palmetto to Savannah, the Silver Star and the Silver Meteor to Miami, and the Vermonter to St. Albans, Vermont. Amtrak Thruway Motorcoach service is provided through the station to Dover, Delaware and Salisbury, Maryland via Greyhound Lines.

It is also served by SEPTA Regional Rail's Wilmington/Newark Line with service to Center City Philadelphia and Newark, Delaware. Like all stations in Delaware, SEPTA service is provided under contract and funded through DART First State, which also provides extensive local bus service as they have since 1994. 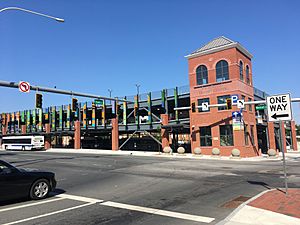 All content from Kiddle encyclopedia articles (including the article images and facts) can be freely used under Attribution-ShareAlike license, unless stated otherwise. Cite this article:
Wilmington station (Delaware) Facts for Kids. Kiddle Encyclopedia.