The Inspira Health Network is based in Woodbury. The now-defunct Woodbury Country Club operated in Woodbury from 1897 to 2010, closing due to declining membership and mounting debt that led to a bankruptcy filing by the club.

As recounted by the historian William McMahon, the Native Americans called the place where the city of Woodbury was to be founded, "Piscozackasing", or, 'place of the black burrs'.

Woodbury was founded in 1683 by Henry Wood, a Quaker from the Northwest of England, who had left Great Britain due to religious persecution. Wood was incarcerated in Lancaster gaol for practicing as a Quaker and left his home in the village of Tottington, near Bury, Lancashire, in a boat to set up a community in the new world where he and his family could practice his religion freely. His surname and his home town went to make up the name of the city he founded – Woodbury.

In 2000, the Borough of Bury, England, and the City of Woodbury were twinned as part of millennium celebrations in both countries. The twinning ceremony was the culmination of a week where more than 300 school children and college students, local dignitaries and local residents from Bury took part in sporting and cultural events held in and around Woodbury with local people. During the week there was a symbolic meeting and reconciliation of the Vicar of Henry Wood's former church in Tottington and the Quaker's meeting house in Woodbury and an ecumenical service attended by many of the residents and visitors.

In 1787, a fossil bone recovered in Woodbury from local Cretaceous strata was discussed by the American Philosophical Society in Philadelphia. The remains were only retrospectively identified as dinosaurian, as dinosaurs would not be scientifically recognized as a distinct group of reptiles until Sir Richard Owen presented his treatise on British fossil reptiles to the British Association in August 1841.

Woodbury was the first city in the United States to mandate recycling. This effort was led by then-councilman and later mayor Donald P. Sanderson in the 1970s, and an ordinance was finally passed in December 1980. The idea of towing a "recycling" trailer behind a trash collection vehicle to enable the collection of trash and recyclable material at the same time emerged. Sanderson was asked to speak in municipalities throughout the country and other towns and cities soon followed suit. 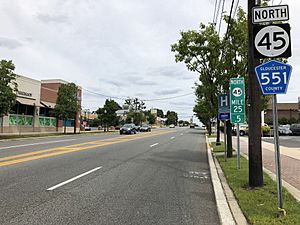 Northbound along the Route 45 and CR 551 concurrency in Woodbury

County Route 551 (Salem Avenue) enters from West Deptford Township in the southwest and proceeds for 0.5 miles (0.80 km) before beginning a concurrency with Route 45.

NJ Transit bus service between the city and Philadelphia is available on the 401 (from Salem), 402 (from Pennsville Township), 410 (from Bridgeton) and 412 (from Sewell) routes, with local service offered on the 455 (Cherry Hill Township to Paulsboro) and 463 (between Woodbury and the Avandale Park/Ride in Winslow Township) routes.

A stop on the proposed Glassboro–Camden Line, an 18-mile (28.97 km) diesel multiple unit (DMU) light rail system, is planned. Originally projected for completion in 2019, the line has been delayed until at least 2025.

Holy Angels Catholic School, a Catholic school serving students in PreK-8, is located in the city in the building built as St. Patrick's School in 1944. It was established in 2017 by the Bishop of Camden as the successor to Holy Trinity Regional School, which was created as part of the 2007 merger of the parish catholic schools of St. Patrick's, St. Matthew's of National Park and Most Holy Redeemer of Westville Grove.

People who were born in, residents of, or otherwise closely associated with Woodbury include:

All content from Kiddle encyclopedia articles (including the article images and facts) can be freely used under Attribution-ShareAlike license, unless stated otherwise. Cite this article:
Woodbury, New Jersey Facts for Kids. Kiddle Encyclopedia.