Ladd's Castle (also known as Candor Hall) is a historic building located in the Colonial Manor section that is Gloucester County's oldest brick home. Added to the National Register of Historic Places in 1972, it was constructed around 1688 by William Ladd, a surveyor who is said to have helped William Penn to lay out a master design for the city of Philadelphia. 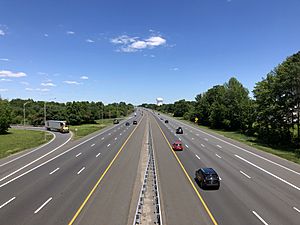 The Port of Paulsboro is located on the Delaware River and Mantua Creek in Paulsboro and West Deptford. Traditionally one of the nation's busiest for marine transfer operations of petroleum products, the port is being redeveloped as an adaptable omniport able to handle a diversity of bulk, break bulk cargo and shipping containers. Studies completed in 2012. concluded that the port is well suited to become a center for the manufacture, assembly, and transport of wind turbines and platforms the development of Atlantic Wind Connection

West Deptford is host of the annual Senior Little League Baseball Eastern Regional Tournament. The winner of this tournament advances to the Senior League World Series held annually in Bangor, Maine since 2002.

The Roman Catholic Diocese of Camden operated St. Matthews School, which had campuses in Verga and National Park. In 2007 it was consolidated into Holy Trinity Regional School, in Deptford. In 2017 was moved to the former St. Patrick's Building in Woodbury due to the superior condition of that building, according to the archdiocese. It opened as Holy Angels Catholic School which still operates. Additionally As of 2020[update] Guardian Angels Regional School (Pre-K-Grade 3 campus in Gibbstown CDP and 4-8 campus in Paulsboro) takes students from West Deptford Township.

People who were born in, residents of, or otherwise closely associated with West Deptford Township include:

All content from Kiddle encyclopedia articles (including the article images and facts) can be freely used under Attribution-ShareAlike license, unless stated otherwise. Cite this article:
West Deptford Township, New Jersey Facts for Kids. Kiddle Encyclopedia.