What is now Glassboro was originally formed as a township by an act of the New Jersey Legislature on March 11, 1878, from portions of Clayton Township. Portions of the township were taken to form Elk Township (April 17, 1891) and Pitman (May 24, 1905). Glassboro was incorporated as a borough on March 18, 1920, replacing Glassboro Township. The borough was named for its glass industry.

Glassboro is home to Rowan University, founded in 1923 and formerly known as Glassboro State College, which was the site of the Glassboro Summit Conference in 1967 between U.S. President Lyndon B. Johnson and Soviet Premier Alexei Kosygin.

The Glassboro Summit Conference between U.S. President Lyndon B. Johnson and Soviet Premier Alexei Kosygin took place in Glassboro. Johnson and Kosygin met for three days from June 23 to June 25, 1967, at Glassboro State College (later renamed Rowan University). The location was chosen as a compromise. Kosygin, having agreed to address the United Nations in New York City, wanted to meet in New York. Johnson, wary of encountering protests against the Vietnam War, preferred to meet in Washington, D.C. They agreed on Glassboro because it was equidistant between the two cities. The generally amicable atmosphere of the summit was referred to as the "Spirit of Glassboro," although the leaders failed to reach agreement on limiting anti-ballistic missile systems.

On June 19, 1986, Ronald Reagan became the first sitting president to speak at a high school graduation when he spoke at the Glassboro High School commencement ceremonies.

Unincorporated communities, localities and place names located partially or completely within the borough include Elsemere.

The climate in this area is characterized by hot, humid summers and generally mild to cool winters. According to the Köppen Climate Classification system, Glassboro has a humid subtropical climate, abbreviated "Cfa" on climate maps.

There were 6,158 households out of which 28.1% had children under the age of 18 living with them, 44.4% were married couples living together, 16.0% had a female householder with no husband present, and 35.5% were non-families. 22.5% of all households were made up of individuals, and 7.8% had someone living alone who was 65 years of age or older. The average household size was 2.66 and the average family size was 3.13.

Glassboro is crisscrossed by a number of major roads. CR 553, Route 47 and Route 55 (limited access) travel north-south, while US 322 passes through east-west.

NJ Transit provides bus service to and from Philadelphia on the 313, 408 and 412 routes.

Passenger train service to Glassboro existed from 1860 to 1971. The station used by the Pennsylvania-Reading Seashore Lines is being renovated as a visitor center. The station is a planned terminal on the Glassboro–Camden Line, an 18-mile (28.97 km) diesel multiple unit (DMU) light rail system projected for completion in 2019. 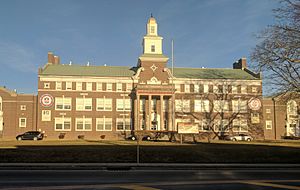 Rowan University is a public university with an enrollment of 19,500 undergraduate and graduate students in 2018–19. The university was founded in 1923 as Glassboro Normal School on a 25-acre (10 ha) site donated by the borough. The school became New Jersey State Teachers College at Glassboro in 1937 and Glassboro State College in 1958. Starting in the 1970s, it expanded into a multi-purpose institution, adding programs in business, communications, and engineering. Rowan Boulevard is a mixed-use development intended to provide a vibrant downtown district for Glassboro, incorporating university student life into its design, as part of an effort to accommodate a student body that is projected to grow to about 25,000 in 2023.

People who were born in, residents of, or otherwise closely associated with Glassboro include:

All content from Kiddle encyclopedia articles (including the article images and facts) can be freely used under Attribution-ShareAlike license, unless stated otherwise. Cite this article:
Glassboro, New Jersey Facts for Kids. Kiddle Encyclopedia.