Paulsboro was formed as a borough by an act of the New Jersey Legislature on March 2, 1904, from portions of Greenwich Township. It was named for Samuel Phillip Paul, son of a settler. 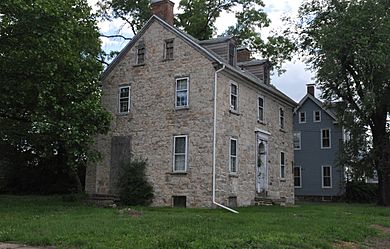 The Paul House, built 1810 or earlier and named for the Paul family who settled in Paulsboro in 1685

Paulsboro is the location of the Tinicum Island Rear Range Lighthouse, first lit on the night of December 31, 1880. In 1997 a local citizen's group was established with the purpose of providing tours and public access to the structure. The lighthouse is one of New Jersey's few publicly accessible aids to navigation and is the centerpiece of Paulsboro's cultural revitalization.

The East Jefferson Street railroad bridge over Mantua Creek was built in 1917 and rebuilt in 1940 for the Pennsylvania-Reading Seashore Lines (PRSL). It is now part of Conrail's Penns Grove Secondary. On November 30, 2012 it buckled, causing seven cars of a freight train to derail. One of the four tanker cars that fell into the creek was punctured, leaking thousands of gallons of vinyl chloride. Homes in the borough had to be evacuated and dozens of people went to hospitals as a precautionary measure due to exposure to the chemicals. Some residents in the area have filed suit against Conrail and CSX in Pennsylvania State Court having "complained about respiratory and bronchial related illnesses, headaches, eye and skin irritations and multiple other symptoms." In March 2013, Conrail announced that the bridge would be replaced with an expected September 2014 operational date. Normally, between March 1 and November 30 the bridge is left in the open position for maritime traffic and closed when trains approach. It will remain locked in the closed position until the bridge is replaced. In September 2013, another less serious derailment took place along the Paulsboro Gibbstown border, with one car leaving the tracks on a train consisting mostly of empty tanker cars.

Unincorporated communities, localities and place names located partially or completely within the borough include Billingsport.

There were 2,286 households out of which 33.9% had children under the age of 18 living with them, 33.7% were married couples living together, 28.1% had a female householder with no husband present, and 30.4% were non-families. 25.7% of all households were made up of individuals, and 9.5% had someone living alone who was 65 years of age or older. The average household size was 2.66 and the average family size was 3.16.

Interstate 295 passes through the southern tip of Paulsboro and Route 44 also traverses the borough.

NJ Transit bus service is available between Pennsville Township and Philadelphia on the 402 route, with local service offered on the 455 route between Cherry Hill Mall and Woodbury.

The Port of Paulsboro is located on the Delaware River and Mantua Creek in and around Paulsboro, and is traditionally one of the nation's busiest for marine transfer operations of petroleum products. From 1998 to early 2011, the Valero Energy Corporation operated an oil refinery here, which it sold in a 2010 deal to PBF Energy for $360 million. The port is being redeveloped as an adaptable omniport able to handle a diversity of bulk, break bulk cargo and shipping containers. Studies completed in 2012 concluded that the port is well-suited to become a center for the manufacture, assembly, and transport of wind turbines and platforms for the development of Atlantic Wind Connection The port has also been home to America's largest asphalt refinery, scheduled to close in 2017.

The Paulsboro Public Schools serves students in kindergarten through twelfth grade. As of the 2017–18 school year, the district, comprised of four schools, had an enrollment of 1,205 students and 103.1 classroom teachers (on an FTE basis), for a student–teacher ratio of 11,7:1. Schools in the district (with 2017-18 enrollment data from the National Center for Education Statistics) are Billingsport Early Childhood Center (351 students; in grades K-2), Loudenslager Elementary School (291; 3–6), Paulsboro Junior High School (163; 7–8) and Paulsboro High School (317; 9–12).

Students in ninth through twelfth grades from Greenwich Township attend the district's high school as part of a sending/receiving relationship with the Greenwich Township School District. As of the 2017–18 school year, the high school had an enrollment of 317 students and 39.4 classroom teachers (on an FTE basis), for a student–teacher ratio of 8.0:1.

The Roman Catholic Diocese of Camden includes the Guardian Angels Regional School. Its 4-8 campus is in Paulsboro while its PreK-3 campus is in Gibbstown.

People who were born in, residents of, or otherwise closely associated with Paulsboro include:

All content from Kiddle encyclopedia articles (including the article images and facts) can be freely used under Attribution-ShareAlike license, unless stated otherwise. Cite this article:
Paulsboro, New Jersey Facts for Kids. Kiddle Encyclopedia.