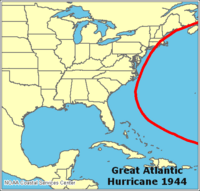 The 1944 Great Atlantic hurricane was a severe tropical cyclone. The entire U.S. Atlantic seaboard was affected in September 1944. The hurricane struck several states from North Carolina to New York and central New England. The storm killed 300-400 people. It caused $100 million in damage.

During World War II, the US kept radio silence about military information including weather. The government was aware that German U-boats patrolled the coastal waters. Hurricane-warning flags were posted at coast guard stations and post offices. But weather forecasters wanted the public to know this was a monster storm. The Hurricane Warning Centers in Miami, San Juan, Washington DC and Boston issued a total of 51 warnings. In New York city alone there were thousands of phone calls made and received between September 12 and 15.

On September 9, 1944, it was first discovered just northeast of Puerto Rico. It was already at hurricane strength. Weather reconnaissance aircraft discovered the eye of the storm over the northern part of the Bahamas. The Miami office of the National Hurricane Center named it "Great Atlantic Hurricane" because of its great size. For the next few days it moved steadily in a west-northwest direction. On September 12, 1944, reconnaissance aircraft reported the storm was growing stronger. At this time the winds were reported at over 150 mph and it was about 500 miles across.

At 10 pm on 14 September the hurricane made landfall on eastern Long Island. At this point it was a category 3 hurricane. It passed just south of Boston, Massachusetts. It moved out to sea at 1:00 am on 15 September. The storm weakened into a tropical storm as it passed near the coast of Maine. It then moved into New Brunswick,Canada. On 15 September it became extratropical. It then merged with another weather system southwest of Greenland.

The hurricane caused a great deal of damage to World War II military ships. Five ships were sunk. The destroyer USS Warrington capsized with a loss of 248 men. The minesweeper YMS-409 also capsized. The United States Coast Guard Cutters Bedloe and Jackson sank off the Outer Banks of North Carolina. Between the two 47 men were lost. The Coast Guard Lightvessel Vineyard Sound was sunk. The entire crew was lost.

New Jersey was one of the hardest hit states. Nine were killed and 390 were injured. More than 400 homes were completely destroyed with about 3,000 damaged. Atlantic City got the worst part of the storm. Heavy flooding and high winds caused a great deal of damage. Reports said there were tidal waves 50 to 60 feet high.

All content from Kiddle encyclopedia articles (including the article images and facts) can be freely used under Attribution-ShareAlike license, unless stated otherwise. Cite this article:
1944 Great Atlantic hurricane Facts for Kids. Kiddle Encyclopedia.