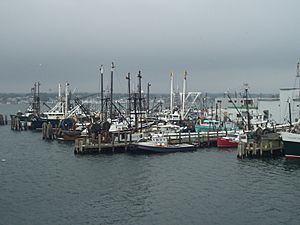 Point Judith is a village and a small cape, on the coast of Narragansett, Rhode Island, on the western side of Narragansett Bay where it opens out onto Rhode Island Sound. It is the location for the principal year-round ferry service that connects Block Island to the mainland and contains the fishing hamlet of Galilee, Rhode Island. 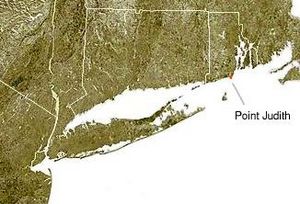 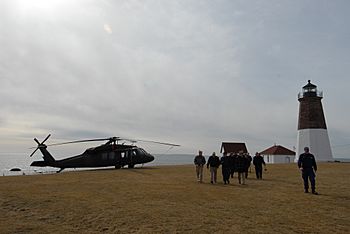 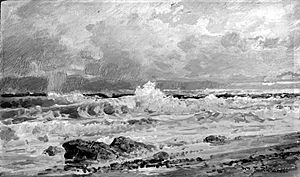 Point Judith was named in the seventeenth century after Judith Thatcher who was a passenger on a small vessel with her father when it ran aground on the point and was almost wrecked. Allegedly, Judith rendered great service and as a result the vessel was saved. In remembrance of this the crew called the point after her name. According to Edmund Quincy's 1874 biography of his father Josiah Quincy, Point Judith was named after Judith Hull by her husband John Hull.

During the American Revolution, the British controlled Narragansett Bay and raided and burned the farms on Point Judith and the surrounding areas in the late 1770s under Captain Wallace.

During World War II, Fort Greene was built with 16-inch guns and others to control the approaches to Narragansett Bay.

Point Judith is the site of the last sinking of an Allied ship in the Atlantic Ocean during World War II. On May 5, 1945, at 05:40, the German submarine U-853 torpedoed the collier, SS Black Point, en route to Boston, She was within sight of the United States Coast Guard lighthouse station at Point Judith. The lookout at the lighthouse was just preparing to enter the sighting in his logbook when he heard the sound of the torpedo exploding as it hit the ship. Black Point sank within twenty-five minutes. Twelve lives were lost among her crew, while thirty-four survivors were rescued. The resulting United States Navy and Coast Guard hunt for the U-853 is now often referred to as the Battle of Point Judith. A United States Navy frigate, destroyers, destroyer escorts, and Coast Guard cutters converged on the waters off Point Judith. Attacks with depth charges and hedgehogs continued until the U-853's destruction was confirmed the next morning by two blimps which dropped a few bombs on the Germans. U-853 may have been the last U-boat to sink a ship during World War II, but she also became the second to last one to be sunk. Her wreck lies in 135 feet of water and is a popular, but dangerous destination for sport divers; at least three divers have been killed there. U-853 is recognized as a war grave with most of the 55 crew bodies remaining inside.

Jandek has a song of the same name.

All content from Kiddle encyclopedia articles (including the article images and facts) can be freely used under Attribution-ShareAlike license, unless stated otherwise. Cite this article:
Point Judith, Rhode Island Facts for Kids. Kiddle Encyclopedia.